A friend recommended this book to me and at first I was a bit apprehensive about reading it.  It seemed like a "chick-book".  After reading a few chapters, I was surprised to see the other side of the spectrum of the teenage angst.  This books delved into the life of a young girl and how she deals with her parent's divorce and her mother's subsequent abandonment of her and her sister to pursue a career as a doctor. 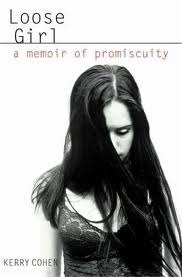 The sisters eventually move in with the father that is more of a hangout buddy than a father.  He refuses to step up for his kids and smokes pot with them avoiding the hard decisions of a parent.  The youngest of the two sisters, Kerry, is in search of "love" at any cost.  She winds up living a promiscuous life style that eventually causes her to contract STDs and have unprotected sex with countless partners, some of which she had only met hours before.

The problem with the book and the story is that  in the end, you do not get a sense that she has ACTUALLY found love, happiness and stability.  The book also ends abruptly.  There is a long drawn out story of Kerry and her relationships and partners and then from one minute to the next, she is married and serious?

I truly hope she found peace in her life.  That is no way to live.  I hope she, if she decides to have kids, she is a much better parent than she was a daughter and what her parents were with her.