This book details the struggles concerning the elections of 1800.  Ironically, I found many parallels with present day politics.  The "Federalist" who believed in big government and central power in a sort of monarchical government against  the 'republicans' or "anti-federalist" that where big supporters of the original intent of the Constitution, de-centralized government doing battle.  This fits the narrative we see today where the two factions are "Big Government" Republicans and Democrats and the smaller government "republicans" (emphasis on the lowercase 'r') which has members of more "traditional" Democrats and Republicans.

The book covers the elections of 1800 where John Adams (2nd President) seek re-election.  However the current Vice President (Thomas Jefferson) also seeks his first win as POTUS.  The most interesting information in this book is how two men could have been allies and come together to create the Declaration of Independence yet be so diametrically different in their respective visions for the country.  Truth be told, I find it fascinating that so soon after winning are independence from the Crown, that John Adams would be the impetus for the Alien and Sedition acts. Ironically, the President and the House were protected from criticism, but the Vice President (Thomas Jefferson), was not protected. 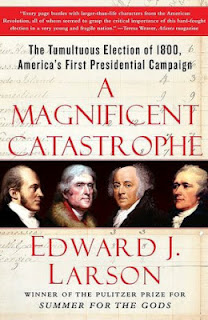 As you all know, Adams was unsuccessful in retaining a second term as President and was succeeded by Thomas Jefferson which served two terms as President.  After their rivalry, Jefferson and Adams remained in contact via mail and talked about religion, politics, to name a few.

It is difficult to ascertain a particular agenda or ideology from the writer.  This is important to me as I like to form my own opinions.  With that said, the author did take certain liberties and stated "FACTS" that in my opinion where not exactly facts.  The one that comes to mind is, that of Jefferson being a deist.

The book flows well and is engaging.  I could not put it down. Not necessarily a page turner, but if you enjoy history; more specifically political history, you will enjoy this book.

Posted by Manny Fernandez at 9:47 PM