Five Families: The Rise, Decline, and Resurgence of America's Most Powerful Mafia Empires. By: Selwyn Raab

If  you are fascinated with all things mob, this book is for you.  Raab covers a plethora of mobsters and law enforcement agents that interacted, investigated, infiltrated and in some cases arrested the mafiosi.  The book is a good "middle-ground" between mafiosi and LOA.  Raab covers the rise and subsequent fall of the "Cosa Nostra". 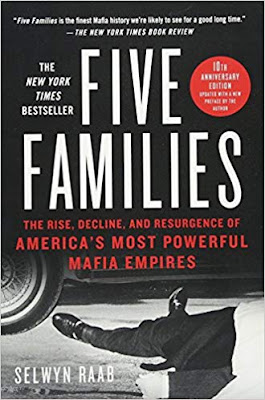 The  author covers some off the well known mafiosi and some of the not so known.  I was really surprised how close the mafia was to the Democratic Party.  It was always known about the Mob's involvement in Labor Unions but this book adds some clarity as to the level of involvement.  Although not a political book, it does show the corruption, specifically on the Democratic Party.

Some of the former mafiosi covered in this book:

Because of the amount characters and the overlapping timelines, the books does travel forward and backwards in time which is a bit of a pain, but not too bad and right away you are back engaged in the story.