Power Grab: The Liberal Scheme to Undermine Trump, the GOP, and Our Republic By: Jason Chaffetz

Lets start by addressing the elephant in the room, pun intended.  I am not a Trumper, I do not own a MAGA hat (although I do not have an issue with it), not a white supremacist (my family is from Cuba), I do not watch Fox, I am not a Republican.  Now that we have that out of the way, lets get started.

I understand the hatred for Trump. I understand that the left wanted Hillary to win.  I understand because I wanted Ron Paul to win in 2008 and 2012 and did not want Obama for one term and certainly not two.  But when Obama won.... again, I again accepted the outcome of the election and moved on.  This outrageous, unhinged behavior is incredible, especially from a party that has always put out a message of tolerance and of a group of people that are smarter than the non-Democratic people.  In my opinion, this image has been shattered.   In this book, you will see how intolerant the left "has become". 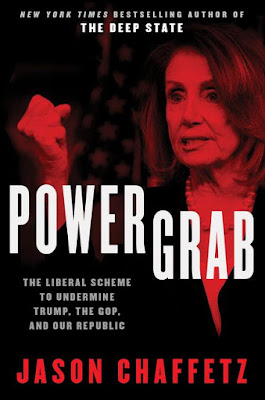 Chaffetz, a former Congressman, exposes the corruption in D.C. and more specifically with the left.  He made a point that I have always known, he mentioned that the left is not about helping people but more about gaining and retaining power.  This is obvious with the latest Congressional Majority today.  They have done absolutely nothing but multiple witch-hunts.

I have to hope that deep down inside, the people who consider themselves "liberal" have to see the hypocrisy of the Left.  I mean as recent as this past week, the Bidens faced reports of Hunter Biden sitting on the board of a Ukrainian company.  What's worse, is that Biden is on a video essentially admitting to what the left is falsely accusing Trump of doing.  On this video, BTW I wanted to include the video but it seems that bug tech has scrubbed access to it, you hear the former VP speaking at the Council of Foreign Relations.  At this meeting he specifically says that if they did not fire the prosecutor, he would hold the billion dollars promised to Ukraine.  Not only did he admit to bribing the Ukrainian leader to stop an investigation that could be unfavorable to his son, but he implicated President Obama.  In the interview and his bragging session, he states the the Ukrainians questioned HIS authority and that they had already spoken to Obama, he said "call him".

Chaffetz exposes Nancy Pelosi's tactics to change the rules to favor herself and maintain herself in power unlike what the Republicans did to John Boehner, former Speaker of the House.  Chaffetz does an excellent job is exposing the 501.c(3) and 501.c(4) and how they use their tax exempt status to affect elections.  He also covers the IRS scandal whereby they denied 501.c(3) status to Right leaning groups seeking that status.  This was a scandal that was essentially whitewashed by the media.

I recommend this book for anyone looking to see how the insiders are working to obtain and retain power in D.C.  I truly believe that if the people hold their respective parties accountable for their actions, and do not fall into the partisan bickering, this country will be much better than what it is today.

Posted by Manny Fernandez at 5:13 AM