50 Things They Don't Want You to Know By: Jerome Hudson

Wow.  This book blows the lid off the twisted, one-sided lies told by the "Mainstream Media".  Hudson takes you through 50 fallacies spread by the Mainstream Media and the Left in general. Hudson, a black male, is critical about many things specifically around the black community however he does not limit himself to the African-American plight.  He goes head on.  You can tell of his Thomas Sowell influences.  Sowell is one of my favorite authors, ever. 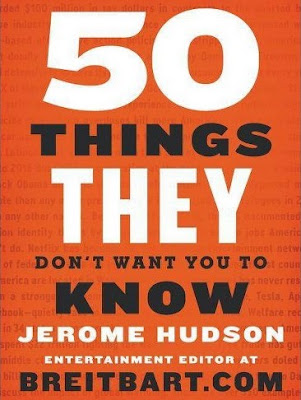 This book is well written and literally, I could not put it down once I started reading it.  I wish everyone would read this book.  Although you can tell he is a conservative, you still can learn a lot.  I often ask my liberal friends about the hypocrisy.  For the most part, they know it but they won't call it out because the perception is that they would then like Trump.  If all parties held their own accountable, we would be in a better place.  However we let our side screw up and we even defend them because we have lost the dignity to disagree with someone without losing our minds.

Posted by Manny Fernandez at 10:49 PM