Inside Out: A Memoir By: Demi Moore

Demi Moore has always been a favorite of mine.  She has been on many of my favorite movies I grew up with.  Moore writes about her troubled childhood, substance abuse, appearance, relationships, abuse and her career.  Moore's parents were a real work of art.  The abuse they put her through is unbelievable from a parent.  Moore left her house at 16.  When her father left her mother, he took his son (Demi's brother Morgan) and she was crushed and felt she was not wanted.  She later realizes that the father she thought was her biological father was actually not her real father.  Her maiden name was Guynes.  At 18 years old, she married Freddie Moore and subsequently kept her last name. 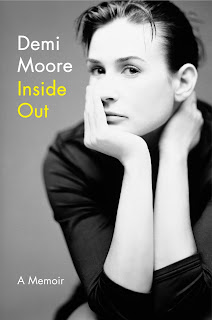 Her mother gave a her boss the keys to her house so he could wait for Demi at home when she arrived at 15 years old.  He allegedly raped her.  A week later "Val" (the alleged rapist) told Moore, “How does it feel to be whored by your mother for $500?”  Later, British media uncovered that Val was actually, Basil Doumas, a landlord who ran La Cage Aux Folles, a hot spot for celebrities at the time including Elton John, Sylvester Stallone and Michelle Pfeiffer.  Incredible.  Absolutely unconscionable. Ashton Kutcher and Moore met, and later married and subsequently lost a baby.  Once again Moore's relationship with Kutcher imploded as did her relationship with Bruce Willis.

This is a short book but packed full of information about a true Hollywood A-Lister.  I finished it in one day.  Mostly because I could not put it down.  If you are a fan of Moore, read it.