A Republic Under Assault: The Left's Ongoing Attack on American Freedom By: Tom Fitton

Amazing book. Fitton has been a thorn in the side of liberal politicians for quite some time. In this book, he discusses what he an Judicial Watch have uncovered thus far using FOIA requests. Because of their efforts, we have learned a great deal about the corruption of the Obama/Biden administration along with DOJ, FBI and even CIA.    Now those that are Anti-Trumpers, might find the fact; and it is a fact, that Obama's administration did not allow for a peaceful transition of power which continued well passed his time in the White House a bit disturbing and non-believable.  But then again those are the same people that beat the Russia collusion drum and continue to do so. The consensus is that Orange Man Bad, Black Man Good.  Even today, we absolutely know that Biden is in bed with the Chinese as is Mitch McConell and Justin Amash (just in case you want to call me partisan), As was Swalwell and Dianne Feinstein. 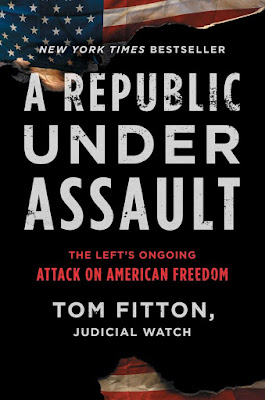 It's amazing that the left wants to call victory knowing the fraud that has occurred after spending four years complaining about Trump cheating in the 2016 election.  Hell even Stevie Wonder and Hellen Keller can clearly see that this election was rigged. This is yet another attempt at a coup to Donald J. Trump's victory.  If there is a silver lining to this, no more do conservatives have to be the accepting, and understanding bunch.  Violence is allowed and expected at this point. The left's soldiers (BLM and Antifa) are well defined and protected by the left, so will the Proud Boys and other groups currently standing on the sidelines.  Anything that happens at this point is on the Left. The left should get in front of this and disavow and rightfully make them terrorist groups.  If you don't believe or agree with me, look at the definition of "terrorist".  If they feel generous, go ahead and label Proud Boys the same (even though the group is run by a Black Cuban but we won't talk about that.

Judicial Watch is key to uncovering what our corrupt and complicit politicians refuse to do.  I don't want to protect the Republicans or the Democrats.  I think "anyone" that is guilty of a crime should go to jail.  I truly think that all of the Obama Gate co-conspirators should serve jail time for their various crimes.  It would show that the Democrats are opposed to what we ALL know, that there is two sets of laws, those for Republicans and those for Democrats.  I have said it 1,000 times, until each party does not start holding their candidates accountable, this will continue to devolve.  We are already a banana republic with our insane voting situations.  It's time we reboot.

If you really, truly care what is going on, read the book.  If you are the one that wears your party lenses and sees things as us and them from a party perspective, move along.  The information contained in this book, is factual and comes straight from the sources.

Posted by Manny Fernandez at 8:43 AM