Interesting book.  I will be honest, I thought this book would be more about his current dealings and coming out as a Republican and Gay, but the book is 90% about his boot camp, Army life and gay relationships.  Still that does not mean the book was not interesting.  It is sad to know that while I was in the Navy, there were people in my ranks that lived in fear of who they were. 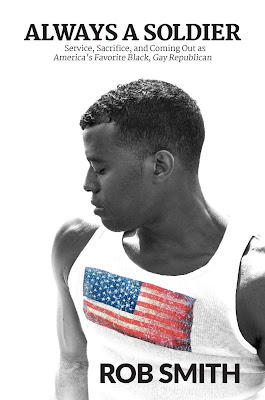 Smith is a well-known Conservative spokes person representing Turning Point USA as well as Candice Owen's "BLEXIT" (Black Exodus).  He is outwardly gay man that struggled as a youth with his weight and sexuality.  Before the 2000 elections, I stepped away from the Republican Party, and found my current libertarian mindset that has guided me since then.  The non-aggression principle has been the foundation of my dealings with people since my transformation.  One of the reason I left the Republican Party had to do with their acceptance, or lack thereof, of the gay community.  I had plenty of gay friends that although I disagreed with their lifestyle, they were great people that I could count on more so than some of my straight friends.
I will say that it seems that he wrote the book about his military service and dealing with his sexual orientation and later added the Conservative portion.  But either way, the book is a refreshing view from a former Liberal, current Black and Gay man.  He blows up all the typical stereotypes.  He chapters on the Woke insanity is on point. I truly believe that that movement and the Liberal movement we see today will collapse on itself.  It is impossible to be a “good liberal” unless you log into the wokeness website so you can get your updated offensive words and phrases. The other day read an article saying white males could never be transgender. This tells you where this is going. God have mercy on us all.
I recommend this book.
Hardcover : 320 pages
ISBN-10 : 1642935751
ISBN-13 : 978-1642935752
Dimensions : 5.5 x 1 x 8.25 inches
Publisher : Post Hill Press (July 21, 2020)
Language: : English

Posted by Manny Fernandez at 1:53 PM