Breaking Free: How I Escaped Polygamy, the FLDS Cult, and My Father, Warren Jeffs By: Rachel Jeffs

A very disturbing, detailed account of the molestation of this young girl.  If you have a weak stomach, do not read this book.  This man was a disgusting child molester and does not deserve to be on this planet.  I am a staunch 1st amendment kind of person with one caveat, you can practice the religion you wish so long as you do not invade someone else's freedoms and rights. 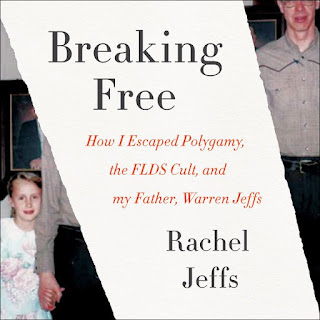 Warren Steed Jeffs is the President of the Fundamentalist Church of Jesus Christ of Latter-Day Saints, a polygamous denomination. In 2011, he was convicted of two felony counts of child sexual assault, for which he is currently serving a life sentence plus twenty years.

I never really followed the "religious" ways of the Fundamentalist Church of Jesus Christ of Latter-Day Saints (FLDS), however I have read multiple books on Scientology.  Aside from the dogma of one and the lack of dogma from the other, they are very similar from the mental antics side of things (at least this particular sect).  I could never be part of a religious group where there is a single person or persons calling shots that affect my life.

Rachel, the daughter of Warren Jeffs was molested by her father from the age of 6 years old.  This lasted for many years until she was forced to marry into a plural marriage.  Warren Jeffs eventually went to prison for child molestation but not Rachel.  He had done it to other girls and had married underage girls.  Rachel subsequently finds out that her younger sister had been molested as well.  Although Warren Jeffs (The "Profit") was in prison, he continued to rule with an iron fist from inside.  Continuously abusing his followers by false prophecies such as: no more sex with your spouse(s), no talking to your kids,  no more milk, etc.

In 2015, Rachel eventually smartens up and starts to see the hypocrisy from her father and eventually the religion. She eventually gets the courage to leave the church, family and the yolk of her father.  I have children, and I can not fathom not staying in contact with my kids.  My son is in college living in a dorm.  I cannot go a day without hearing from him.  Rachel's husband decided to listen to "The Profit" and not make contact with his kids.  From a twisted type of perspective, I guess he was worried about losing contact with all his other kids from the "sister wives", although he was constantly being sent away by "The Profit".