Wake Up: Why the world has gone nuts By: Piers Morgan

I will begin by saying that I do not agree with everything Morgan believes in.  Most importantly on the 2nd Amendment.  Ironically, we are on the same page when it comes to freedom of speech.  Additionally, we share the same views on the woke society we see today.  Ridiculous woke sentiment such as pronouns, and the offensive word or any word containing "man" (e.g. mankind, woman, human, etc.).  We are becoming the most moronic society on the planet.  We are allowing a small group of loud people define us as people.  I am glad I will not be around in another 80 years to see it devolve even further into the abyss. 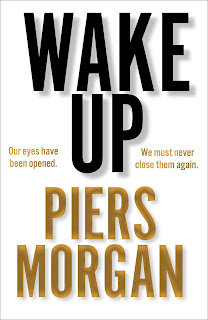 Morgan does not understand the American way of doing things.  This is exactly why the 13 colonies of farmers and peasants kicked the crap out of the, at the time unbeatable army.  He is for unlimited lock downs.  I understand that for the anti-Trumpers, his comments about bleach is a godsend.  I can agree that Trump should not think out loud and talk about ideas without being, but I do believe that they are holding him to a different standard.  There ARE different synthetic compounds that COULD have the same affect on something in the body that would not in fact be Clorox Bleach.

He seems to have a fixation on Meghan Markle and Harry and its in the book ad nauseam.  He goes into multiple tirades.  Maybe since I am not British and don't really care about the "Royals" so maybe I am being too critical.

Later in the book he speaks about Adele, the singer and her weight loss.  It only goes to show that you cannot make everyone happy in this society.  "They" "fat-shame" her and then when she loses weight for her health, they shame her again for turning her back on the overweight people.  I am not into the Super Model, super thin look.  I feel a woman should have curves.  Also women have children and put on weight and get stretchmarks for the miracle they performed.  They should not be judged on either having more or less weight.  My opinion is who wants to lay in bed or on (pardon visual) on a pack of bones.  I am not into morbidly obese women either.  I had gastric bypass 6 years ago and lost 150lbs so I know the struggle.... still do.

This is a great book if you are opposed to the ridiculous, moronic "wokeness" that has contaminated our society.  We have not prepared our kids to survive the real world.  These dolts think that by removing racist or perceived racist words from our lexicon that somehow their will be no more racism.  They feel that if you remove any words that offends someone for something that somehow offense will be removed.  It only allows for closeted feelings to be stored away and affect people and no one is going to know.  For instance, I am American but my family is from Cuba.  If there is someone that thinks I am a "wetback" or a "spick" and I remove those words for the lexicon, I am at a disadvantage from knowing who truly hates me.  I would much rather be offended by them calling me something like that and choosing to disassociate from them, than to think they like me when they truly don't.

On George Floyd, he is wrong.  I understand the book was written before the full video was released.  However after watching the video in its "REAL" entirety (not the one Morgan saw at the time of the incident).  There was nothing in the video that showed race being reason for Floyd's death.  However it does show the sadistic negligence by an overzealous police office that did not have concern or the sense to remove his knee from the knee of a criminal.  Floyd was not a saint, he was not an innocent man.  He did not however deserve to die for his crime at least it was not for the police officer to decide that.  Had he committed a crime, tried and found guilty and that crime was found to carry a punishment of death then that is a different story.  The cop was a a-hole and deserves what he has coming.  With that said, the BLM movement had an opportunity to bring more people into their movement but instead chose to alienate more people during a time that there was unanimous support for the movement.  Make you wonder if there was a movement to divide instead of unite people.

Again, I agree with a lot of his views, but also disagree with many things as well.  The beauty of freedom is that I can read his book and agree and disagree but still allow him to exist even if he is not lock-step with me.  I hate that the word "privilege" has been weaponized as have other benign words.  I hope people wake up.  This is not liberalism, it is a new form of fascism, ironically coming from a group that espouse how they are against the very same.