A Long Way Home: A Memoir By: Saroo Brierley

For whatever reason (I have no idea), I have this fascination with India.  One of my favorite all-time books is Shantaram by Gregory David Roberts.  I hope one day to visit India.  It is on my bucket list. 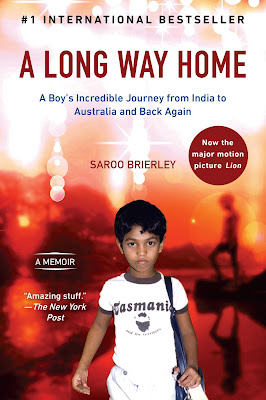 This book struck a cord with me.  During one of our many Washington D.C. vacations (still my favorite place to vacation), my oldest son was 10 years old, he is now 21.  But on that day, my wife, two sons and myself were on a train in D.C.  My oldest son was by the door, behind him was my little one (4 at the time), then me and then my wife.  We stopped and doors opened.  My oldest son walks out of the train and the doors immediately close.  I pried the doors open and was ready to jump out leaving my wife taking care of my youngest while I stayed behind with my oldest.  However as I was opening the doors, and the train moving, I realized my little one was in front of me and I would have had to jump with him.  Too late.  My son stayed alone at a train station at 10 years old.  I was like a caged animal.  I must have called 911 one thousand times.  When we got off at the next stop, I was going to have my wife ride back on the train to where my son was and I was going to take a cab.  That did not work out well because there was a bunch of gang-bangers at the station with AK-47 tattoos on their face.  Finally, PD called me back and told me the station police were sitting, watching him from afar because he (my son) would not let anyone get next to him.  I was elated that he was OK.  That same day, actually an hour later, my son had a shinny new cell phone.

What an incredible story of resilience and perseverance; a story of family, love and mourning.  The irony of this book is that in my favorite book "Shantaram" an Australian seeks refuge in India while in this book, an Indian finds refuge in Australia.   I am not a Google fan, not in the least. However in this case, one of Google's products helped this man find his long lost life.  Maybe I give them somewhat of a pass...... probably not.

I plan to watch the movie as soon as I finish the book as I do not want to mess up any surprises at the end of the book. I thought this was a great story. One that was void of politics and political correctness.  Just a story about someone that I am sure couldn't care less about any of that.

I can't even begin to imagine how a five year old, literally not even knowing his true name, to survive the savage streets of India.  I would not have wished that on an adult let alone a child.