Who Thought This Was a Good Idea?: And Other Questions You Should Have Answers to When You Work in the White House By: Alyssa Mastromonaco

Very interesting book. It is not your normal politician book but a "regular person" that was involved in the inter workings of the presidency. I am not a fan of Obama nor do I think he was an effective leader for this country (although I am sure many may disagree), but her book did give me a glimmer of hope (no pun intended) that Obama wanted to focus on recovery although I think a lot had to do with his re-election. 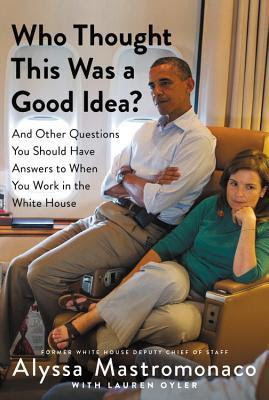 Mastromanaco seems like a very down-to-earth person that I could probably have a friendship with in spite of many opposing views. Her book did not hit me as if she was a ideologue although she did make a few comments to the contrary (e.g. Newt Gingrich and the hit and run on her Saab).

The book is kind of all over the place from a chronological perspective but she addresses it in the book. Still it is a little annoying. I recommend it to anyone that like the behind the scenes look at the inner workings of the White House. I would have absolutely taken that Jon even if I was not a party member of the POTUS. Some people would deny meeting the sitting POTUS because they disagree, I would meet them given the opportunity. I once stood 6 feet from Obama. I did all the networking for the 2012 Presidential debate. Had I had the opportunity to take a pic with him I would have.