They Never Let a Crisis Go to Waste: The Truth About Disaster Liberalism - by Jason Chaffetz

What a great book.  I enjoyed it greatly.  I recommend it to anyone wanted to see what the Democratic Party has become.  Long gone are the days where Democrats were staunch 1st amendment advocates and the "liberal" moniker came from the fact that they were liberal about everything.  Now they are nothing but authoritative, anti-constitutionalists and they crazier the idea, the better for them.  Even Bill Maher has on many occasion has slammed the new woke party. 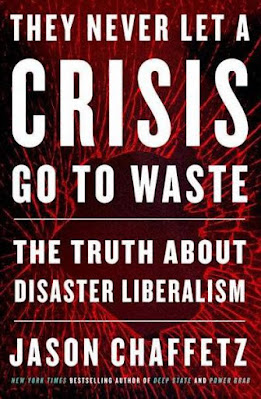 Incredible how the same group of people who opposed Hydroxychloroquine, even though it has been FDA approved for literally decades and has had licensed medical doctors who treated thousands of patients, are the very same that are pushing, even with the fear of violence, a "vaccine" that has not been tested, not FDA approved and that medical doctors and nurses are refusing to take themselves.

Also those same people who opposed Trump bringing in federal troops into these insane cities (where there was an actual insurrection) such as CHAZ because he did "not have authority" are the same people that were then criticizing him for not acting and not calling for a federal lockdown and helping their sad blue states that were unprepared.

It used to be that people took a position and then either lived by it or distanced themselves from it. Now the left will switch on a dime and then deny, regardless of the evidence, it and take the opposite stance when it is politically expedient.  Politicos must not know how the Internet works.  I guess since control it. Like Pelosi, did she not remember that while the CORONA Virus was taking hold of this country, she was dead set on falsely impeaching Donald Trump and later went out to China Town San Fran, hugging everyone saying "Orange man bad" don't listen to him and now all of the sudden she is the conductor for all things COVID?

If the people of this country would realize that we were thrown deeper in debt on the auspices of COVID relief but only went to pay off and bail out leftists organizations and politicians, the people would be calling for the heads of the politicians. We need to repeal the 17th amendment and go back to the states sending representatives that have the best interest of the states they represent and not the party.

When Arizona passed SB1070 where LEO would be required to asked people for their immigration status.  The liberals lost their minds saying that immigration was solely a Federal Government (Obama Administration at the time) mandate and not the states.  Fast forward to the riots on 2019 where the liberals then changed their tune when Trump wanted to send in Federal LEO to protect Federal buildings in Liberal Riot cities.  The Liberals then became the stalwarts for the 10th amendment saying that Trump should be impeached.... Again because he was causing a "Constitutional Crisis" again.  They made it clear that the Federal Government had not authority over the states. And then when you fast forward again, (Biden administration) they again returned to the Federal Government is the ultimate power that should NOW also have authority over states voting.  You see, there is zero consistency.

Same with the Hunter Biden laptop scandal.  They did not cover it. If they did it was "Russian Misinformation" and Social Media blocked and in some cases booted people for posting anything about it.  NOW, NBC just said "cannot believe we missed it".  Trump was impeached for doing a QPQ with Ukraine based on a "whistle blower" (We all know now and did then that he was in fact a CIA operative with Anti-Trump feelings).  Yet Biden is on video admitting to doing a REAL QPQ telling the Ukrainian President that if he did not fire the prosecutor that was investigating fraud by the company where his son was getting a sweetheart deal of 85K a month for being on the board ironically during the time his then VP father was in charge of relations with Ukraine.  Joe Biden even implicated President Obama.  Yet the media spiked the story and did not run with it.  Today any post regarding election results for 2020 will get you in social media jail.  You posts will be deleted, you will be kicked of the platforms, etc.  However if you decide to write pages and pages about golden showers, Russia collusion, QPQ (Trump Only), Russians stealing the election for Trump, that you can post all day long even though it has all be disproven with zero consequences.