Hate Crime Hoax: How the Left is Selling a Fake Race War

This is a great book. I know the title calls out the "Left", however the book covers a much larger problem. This book covers 81 "Hate Hoax" cases.  Reilly covers some insane, IMHO, notions of White Privilege and Cultural Appropriation. 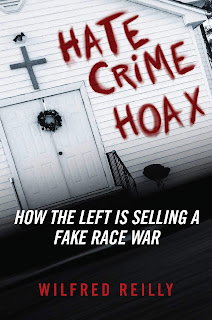 The notion that somehow people that are white have more chances and more opportunities is a fallacy. What does have "privilege" in this country is wealth. Think about it, who do you think would have more "privilege" John Smith (a fictional white person) or the family of Jay Z and Beyoncé, or the kids of Will and Jeda Smith?  How about the daughter of the CEO of SoSo Def, Jermain Dupree?   These people would have and DO have greater opportunities than any "normal" white person. How about those white people that grew up in the inner city (many do), went to the same schools, had the same friends, of parents in the same socioeconomic circles; these people are equally challenged by their surroundings.  Additionally, look at most of the CEOs of the largest, most successful companies.  Very few are overweight.  Is there a "thin privilege"

In "Cultural Appropriation", this is another insane notion that occurs when normally ONLY a white person appropriates someone's culture. The problem with this is that if you follow it to its logical conclusion, non Mexicans will not be allowed to go to Chili's Bar and Grill, no one would be able to eat Chinese food except for Chinese people, no non-black people would be able to listen to hip hop etc. It's absolutely insane.

What is shocking to me in most of the cases he covered in the book is the continued support of the hoaxer even after they were discovered.  It goes against all logical thought process. Anyone representing a particular group should be appalled by someone hijacking their causes. Furthermore, it diminishes real hate crimes.

Some of the hoaxers said they did it to call attention to something they were fabricating. However that is like me saying I robbed a bank to call attention to the weak security they have. And the organizations that support them are on record saying it does not matter if they lied because they are sure that other crimes are probably happening.


Posted by Manny Fernandez at 9:36 AM