The Real Watergate Scandal: Collusion, Conspiracy, and the Plot That Brought Nixon Down By: Geoff Shepard

This starts off with a good preview of Nixon's rise to "stardom". It covers his utter failure on the Kennedy debates and of course Watergate.  Author describes the political makeup of the prosecutors and secret meetings the prosecutors were having with judges.  This is extremely disturbing.  I will admit that I am not a Nixon expert so this is my first real attempt to read on the subject. 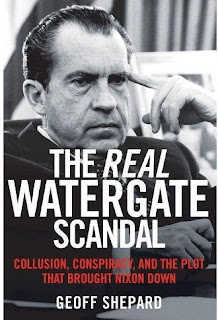 This book was an interesting read.  With the current climate and temperature in the D.C. this book is very apropos. Seeing what went on during the Watergate debacle and how the prosecutors and judges were having secret meetings and stacking the deck especially the Dean "sentencing" which was a sham, it cleared up a lot of the strategy being used today.  I recommend this book for noobs to the Watergate / Nixon genre as well as long time readers.  I can say that based on this book and the hatred of Nixon, I can only imagine the pressure on both sides with the Trump White House. Nixxon was a loved POTUS compared to Trump.  I am going to read the following books:

Blind Ambition By: John Dean
All The President's Men By: Bernstein and Woodward
The Nixon Defense: What He Knew and When He Knew It By: John Dean