Kingpin: How One Hacker Took Over the Billion-Dollar Cybercrime Underground By: Kevin Poulson

This title had been on my "To Read" book list for at least two years.  This was an excellent book and when juxtaposed with "Cult of the Dead Cow: How the Original Hacking Supergroup Might Just Save the World" which highlights the different paths that many of the "black hat" hackers took, it is a sad tail of Max Ray Vision formally Max Ray Butler, and his downfall. 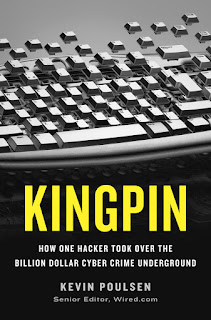 Paulson, a former black hat hacker himself, did an extraordinary job documenting the life, ascent and subsequent decent of Max Vision.  Max was no stranger to jail. He had already served time in prison way before this final cardermarket.com debacle.

Vision is credited with identifying and subsequently exploiting a serious BIND vulnerability, (most common DNS server used for Domain Name Services).  He "patched" the vulnerable servers but kept a backdoor.  He served 18 months for that incident. While in prison he, much like many other criminals, grew his social circles of other criminals. Upon getting out, it was not long before he got into trouble again. Changing and later dominating the "carder" black market.  He stole over 2 million credit card records.

Sadly, for Vision's sake, he did not follow his instincts when he discovered "Master Splyntr" was an Federal Agent. That was his undoing.

Max Ray Vision, 37, was sentenced to 13 years in prison, was also ordered to pay $27.5 million in restitution, and to serve five years under court supervision following his release, during which time he'll be allowed to use computers only for legitimate employment or education.

It is truly a sad tail to see someone as talented as Mr. Vision was and is, throw his career and life away for what he could have easily made 100x over in the white hat world. I guess for there to be good, there must be evil; where there is light there is also darkeness.

Recently (2013), Vision was accused of using a cell phone in prison to gain access to debit cards and use the proceeds to purchase a drone.  Said drone was used to smuggle contraband into the prison and once again, a snitch outed him.  He was 12 years into his sentence and now is looking at another extended stay in the "Federal Hilton".