The Silencing: How the Left is Killing Free Speech By: Kirsten Powers

Trigger warnings, safe spaces, micro aggression, cultural appropriation, white privilege and other moronic views is a huge problem today.  I normally ask people "Where are you from originally", this is considered micro aggression?  Powers, a Liberal, blew the lid off of what Conservatives and independents like myself have seen for years. "Free speech for me, not for thee" and "Tolerance for me but not for thee" is apparently the new new-liberal motto. 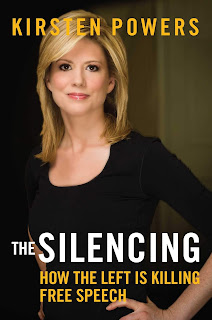 Conservatives have been denied speaking at universities because of their beliefs or political affiliation.  In other words, we need to practice exclusion to attain inclusion.  This is insane.  Universities used to be a place were freedom of speech was not only encouraged but many of the battles for the same were fraught. Today it's the complete opposite.

So the illiberal oppose Christianity but support Islam which we know is anti-LGBT and have zero respect for women. I guess enemy of my enemy is my friend.  Selective Outrage much?   The new left has even gone after Bill Maher for not following lockstep with their new illiberalism.  Maher?  He is ultra liberal but it only shows to what level the new left has gone.

In my opinion anyone who requires to have trigger warnings, and are offended by anyone that does not agree with them are not ready to be part of society and honestly require severe mental health help. We have failed our future generations. We have been bad stewards of freedoms and rights. We have been able to unravel what has been a beacon for the world for centuries.  I will address the typical triggered response, I do not want to go back to slavery or Jim Crow. I live by a strict motto; "no groups, no colors, no hyphenations and no labels". ~me.

This book was written during the Obama administration.  Ironically, she writes about how Obama was attacked by negative stories from Fox. Wow. Fast forward to today and Trump, Obama has a honeymoon for 8 years.

I commend Powers for taking on a subject considered a third-rail in her circles. She has laid out a concise, well documented, and honest book sure to rock the snowflakes that have corrupted society and have contaminated the future of this country. I can only hope that a miracle occurs and these drones realize how wrong they are. Not only is it bad for the country but the future of other countries looking at us, will be emboldened to attack us because they will know that the people here would fold like a cheap suite.

If this continues, the new left will live in an echo chamber.  The irony is that just because you use force and intimidation to stifle the speech, you do NOT change the belief. For instance if you have a person that is a racist, you would never know where this person stands. Given the right situation and opportunity, that racist would act on their true feeling. Not only that but the inability to speak your mind and your thoughts as offensive as they may be, I believe multiplies those thoughts.  Those thoughts coupled with ridiculous snowflake antics could be devastating.

Powers decimates the media and whistleblowers. Ironically she is now working for CNN.  She states that Obama's was the most closed WH thertofor.  Probably different today with Trump although not sure. Obama has his own videographer that spins the message. He gave far less interviews than Bush and Clinton.  She is rightfully critical of Obama's narcissism and he lack of transparency. Anyone with a pulse would have seen that.   With regards to whistleblowers, Powers writes about the aggression with the whistleblowers while leaking other information for political gains.

When it comes to climate change, the fact that a media organization is allowed to block opposing talk, letters or articles is such a scary situation. It is a double-edged sword. I was utterly shocked when I read "Kentucky Professor northern pro life.  Any violence perpetrated against that silly display was minor to how I felt when I saw it" WTH is this crap?  The more I read about these things the more I believe that political party or affiliation should be a protected class. Furthermore if a women's group grossly discriminate against a conservative woman and does not fight for the Conservative woman in the same vigor as a liberal, those groups should lose their tax exemption as should any group purporting to protect a group of general users.  If the women's or Hispanic or black or whatever else is ONLY for a particular party, they should be called out and shutdown as a racist organization. Although that attacks their 1st amendment, I do not see another way.

Posted by Manny Fernandez at 4:34 PM