A Song for You: My Life with Whitney Houston By: Robyn Crawford

Whitney Houston was a once in a lifetime kind of person. She meant so much to so many people.   I remember saying to myself when she married Bobby Brown, "Now he is going to turn her out". Little did I know that Houston was as bad of a "bad-girl" as he was a "bad-boy".   Weather you were team Whitney or team Bobby, no one can debate that she was a star like no other. Her voice was truly emotionally moving. 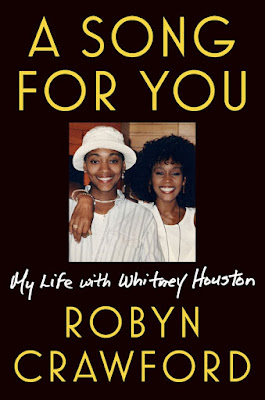 In "A Song for You"  Crawford revealed what we all suspected.  Whitney was indeed, at a minimum bi-sexual. I think today, almost eight years after her sad passing, her lifestyle would have probably been an inspiration for some struggling with their sexuality and not something to me ashamed of.  The "relationship" was not a one-time, curiosity; rather a long time sexual relationship.

The chapter on her brother's death, the one on her mother's death and certainly the one on Whitney's death were very powerful and heard to read.  I understand this is Ms. Crawford's account of what happened, and I am sure when I read the Cissy Houston's book, she will probably have a different version of events, but for now it is very hurtful that Cissy allowed this to go on.  Shame on Bobby Brown as well for being the vehicle for her and her daughter to destroy their lives and die the same way.  Their deaths are indirectly on his hands.

This is a great book about a wonderful singer that I truly loved.  What a loss to everyone.  I recommend it to any fan of Whitney.  May Whitney and her daughter rest in eternal peace.  Such a huge loss.

Posted by Manny Fernandez at 3:51 PM