The Plot Against the President: The True Story of How Congressman Devin Nunes Uncovered the Biggest Political Scandal in U.S. History By: Lee Smith

This is another book in the throng of books I have read regarding this President and those around him trying to bring him down.  I am not a Republican but I have witnessed this country improve substantially.  I have also seen the media and the left doing everything and anything to discredit him and his family.  Take for instance his wife.  She is arguably the most beautiful First Lady we have ever had; for God's sake she is truly and literally a Super Model.  Yet you go through the grocery store and if you are lucky, you will see her on 1 magazine but under some sort of scandal (e.g. FLOTUS and POTUS divorcing).  Yet under Obama, Michelle was on every cover of every magazine and every show.  Although I happen to think she is a beautiful woman, she is certainly not a Super Model and the Obama's, if you care to look, were so corrupt and non-transparent.  Everything from Separating Families, Bombing countries, deporting illegal aliens (yeah I said it). 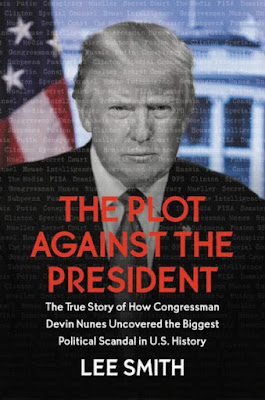 It's crazy to me that the public (primarily leftists and anti-Trumpers) will believe absolutely anything negative about Trump. The more salacious the better. Anything from being a double-agent for the Russians to golden showers and anything in between. Yet when confronted, with facts even that there was in FACT a coupe attempt that is still very much alive today, THAT my friends is tin foil hat craziness.

This book covers, in detail how the "deep state" or whatever you want to call them, abused their power and positions to attempt to reverse a victory by Donald J. Trump in 2016. The irony is that the very same things they accuse HIM of doing, and have been unable to prove a single thing, is precisely what the the Left and anti-Trumpers have done. The crazy part about it is that they come out on TV with this righteous indignation against Trump's supposed action when all the while it is them that are guilty of collusion, obstruction of justice, hatch act, hiring foreign counties to affect elections and oh so many more. The media and the people are myopic to the hypocrisy or are just down right evil people.

Now we are at this impeachment crescendo where the left thinks this is going to be the grand finale of their plan, but don't count your chickens quite yet. I predict this, coupled with all of the rest of the failed attempts at the coupe will be seen by the people and you WILL have a "perfect storm". As we saw with the unpopular George W. Bush's second term where he won the electoral and the poplular vote, you will probably see the same with Trump. Not only this but the "real" "do nothing Congress" will go back to Republicans. At that point, the shoe WILL drop. You will see the full force of the United States Government rein down on the previous administration including Hillary "rotten" Clinton, Comie, Clapper, Brennen, Peloci, Schiff, Nadler, Obama, Rice, Lynch and the rest.

I think this is good. I think the Dems need to police their party as do the Republicans. I truly believe that the Democrats have opened Pandora's Box and have woken a sleeping giant. They have set the rules by which future administrations will be looked at and investigated by. Be careful what you wish for Nancy.

I have read other books on this subject and this one really gave me a lot of little details and timelines of which I was not aware of. Also the attacks against Mr. Núñez and his family.

I fear the media companies that are owned by corporations that benefit from Socialistic endeavors and the Social Media companies that have way too much power to influence all sorts of things political and others is a problem. I would love to see a bipartisan attempt to rein in the corruption in the media as well as the Social Media. Recent history has shown how the media protects their leftist heroes regardless of what heinous crimes they have committed. Weinstein, Jeff Epstein, Matt Lauer, Clinton, Polanski just to name a few. These people are predators, real predators of even children. The media outlets consistently spiked stories about them. Yet Trump simply says that women let famous people "grab them by the pussy" and these very same people who are guilty themselves (Clinton, Lauer) and the media outlets that protect them go full apoplectic.

I hope the American people see through this hypocrisy and force change. I don't care what party gets caught up and outed, it's not and should not be a partisan thing. The ends do NOT justify the means. We all have the presumption of innocence, freedom of speech and right to bear arms to name a very few. Analyze, these rights are all being taken from us in the name of the "better good" but the better good only comes when we have and protect those rights. ALL OF THEM.


Posted by Manny Fernandez at 1:35 PM