Catch and Kill: Lies, Spies, and a Conspiracy to Protect Predators By: Ronan Farrow

A disturbing tale of money, power and influence and the attempted cover up to protect the elitist. I truly enjoyed this book, however if there is one point that bothered me is his latter chapters where he talks about President Trump.  Seems to me that he was hoping to entice people to read the book and threw in a few chapters on Trump, which by all accounts had consensual sex with women, and does not make him a "Predator".  I think it was a hit piece or something to ease the outing of Democratic donor and "real predator" Harvey Weinstein.  He also takes a cheap shot at Trump by not making note that Trump expelled Epstein from his club and repudiated Epstein after finding out he was engaged in the shenanigans he was up to. 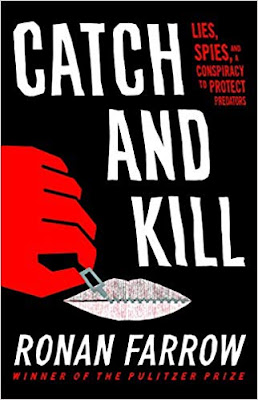 I did not know that the author is the son of Woddy Allen and Mia Farrow. He is not new to sexual assault and misconduct based on the

It is so troubling to read what Weinstein did to these women.  Call me naive, but I always pictured rapists as "a rapist".  When you see Weinstein as a successful Hollywood Mogul that could have paid,  if that is what you are into, for women to have sex with him, but chose to rape them, you have to see that he is putrid individual.  Crazy part is, that he has a daughter.  How would he react to his daughter getting raped?  I am sure he would not use his power and influence to protect the rapist.  I do not have daughters of my own, but I do have three sisters, a mom, and a bunch of nieces and daughters of friends of mine that I love as my own.  I believe this guides the way I treat women.  I would not treat a woman in a manner that I would not one someone to treat my loved ones.

The gull of NBC who leans LEFT politically, could go against the perceived Liberal only #MeToo and that have the woman's rights (you know since the Right has a "war on women") in mind all the time is sickening.  Total hypocrisy.  Not to mention Matt Lauer's escapades.

Fox personnel were also accused of sexual misconduct.  The difference is that Fox cleaned its ranks and brought in outside people to investigate.  NBC refused to do so, based on a Farrow interview.  This speaks volumes.

Posted by Manny Fernandez at 4:52 AM