Witch Hunt: The Story of the Greatest Mass Delusion in American Political History By: Gregg Jarrett

This is a well researched and detailed book that sheds light on the shenanigans of the Trump Haters on the left and on the right.  It's appalling to me that given this president's track record on economy, rights, security, and all other things that the haters would not give him a break. I did not like Obama, at all but there were few things I gave him credit for.  The bias against this POTUS, ironically by a group that spends their entire existence pointing  out biases on others from implied racism to micro aggression and everything in between  is shocking. Literally today I read an article that said the Michelle Obama has tweeted a picture of her family for Thanksgiving. Really?  No positive reports on anything about the current  FLOTUS but the Obama story gets legs, all for sending a Tweet? 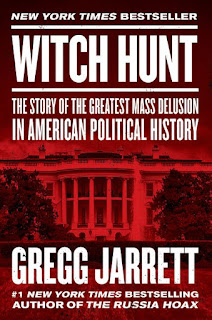 I am always shocked how people still today would say that they would want Hillary instead of Trump. Knowing that Trump has not been found guilty of anything as of yet and that Hillary has been proven to be a snake on so many levels, that they would still want her.  It's OK to have an inept , fake, lie to your face, career politician which has been embroiled in scandal after scandal after scandal since the beginning of her adult life as POTUS?  I'm a libertarian and I had to admit we had weak candidates in 2016. Why is it so hard for the Dems to admit Hillary was the wrong candidate?  Why is it so hard for the left to see the hypocrisy?  Just take the position about accepting the results question asked in the debate. Clinton was appalled that Trump would not accept what she thought was a sure thing. Yet here she is 3 years later still not accepting the results and not being called to the mat on it.

Anyone that has done even cursory  research on this subject will know that the anti-Trump movement is real and is strong and it is really unfair.  I am struggling with being happy or sad that the Dems have changed the rules of engagement forevermore. On one side, I am sad that this president has had this happen to him and that the founding father's Gran Plan has been perverted and distorted in such a way.  However, I then feel I should rejoice because the next Democratic POTUS that comes in will have to be a saint because the ROE have changed and impeachment, special councils, investigation and the like would be SOP (Standard Operating Procedure) now.  Of course that is assuming that the media, you know the ones that spike stories about Harvey Winstein a full-on rapist, Polansky (child predator) and Jeff Epstein, another scumbag extraordinaire, and Matt Lauer, would not carry water for them as they did for Obama.  During Obama's presidency, the MSM did puff pieces.

I truly hope the IG report comes out and we are able to prosecute those that acted this way against the country. Democrats and Republicans will fall and I am fine with that. I am also fine with Trump being impeached for an "impeachable offense"; this Ukraine call is not one though.

It is indeed a great book, heavily researched and written by an attorney that understands laws and has been in the "political game" for some time. Read it so you at least have the facts and not the spin.  Make your own decisions and form your own opinions AFTER.  The MSM is lying to us and "reporting" fallacies and opinions and not facts. It's a war on your minds.  Don't let the enemy in. Fight the BS and form your opinions. If you still feel Trump is bad, so be it. If you at least walk away saying I still hate a Trump but he has been wronged here or there, that is fine too. But we have seen the media wrong so many times on so many levels from the exit polls to the impeachment, why would you believe ANYTHING they say?

Posted by Manny Fernandez at 10:22 AM