The Case Against Socialism By: Rand Paul

An amazing book Sen. Paul.  Well done sir, well done.  This book should be read by non-socialist and proponents of  Socialism.  This book blows the lid off of the fallacy of "Socialism".  Paul describes the Socialist countries in the past and how they caused millions of deaths and tyranny.

Income inequality is a fallacy. It does not say anything about how those with less income. For example if I work in Dubai and those around me have luxury cars like Bugatti, Lamborghini, Ferrari etc, but I have a Toyota Camry. Yes there is inequality of course but I am not on an ox or donkey. I still have a great reliable car. 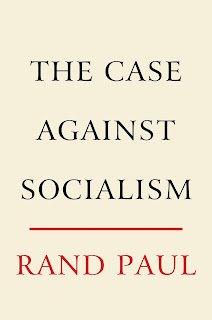 How about a hot wife or husband. Is there inequality there as well?  Why is it that my wife or husband is not as good looking as that other person's wife or husband. Should we permanently scar their spouses to ensure that there is hotness equality?  Obviously my last example is a ridiculous example, however these days, the insanely obvious farces easily become insanely real.  Look at Chapter 38, where Paul talks about how China has created facial recognition in public restrooms where if you have NOT gotten toilet paper in the last 9 minutes, they will release 81cm of toilet paper for you to use.  Where the government there has facial recognition and you have a social credit score.  If you smirk while passing a photo of the leader, you loose points.  This is important since you have the Kentucky's Covington Catholic High School students with the MAGA hat.  The media finally after failing to prove the students caused anything and facing a legal backlash, now say that his face shows racism.  How insane is this where we now have "Face Crime".

How about intelligence?  If your child is smarter than my child and your child gets accepted into a better school, should we shut down the better school to force the "not so smart kids" are more equal?  I wonder Yale, Harvard, Princeton and the like would be willing to lower their tuition and their standards in the name of education equality?

Dwight D. Eisenhower once said,  "I hate war as only a soldier who has lived it can, only as one who has seen its brutality, its futility, its stupidity."  This a synonymous with these idiots on the left calling for Socialism when they have never lived in it.

Paul also destroys the "Nordic Countries" fallacy.  He describes how those countries are NOT in FACT socialist but rather Capitalist Countries with large Welfare states.  Not at all free since the middle class pays over 60% in income tax and an additional 25% VAT Tax on everything including food.  This is 85% of your earnings going to the State.  This leaves you with 15% of your check for food, and all other expenses.

The REALITY is you will either have Venezuela style Socialism or a heavy Welfare state such as the Nordic Countries which are moving back to a more full Capitalist style.  Socialism is for the people NOT the Socialists.