I loved this book.  I was attracted to it after reading his other book "The Lucky Man"  Lucky Man Review  Fox is an intriguing personage that is extremely inspiring. 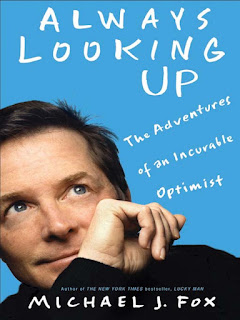 Faced with a debilitating disease that will trap him in his own body, he does not allow it to stop him.  His tenacity towards life is awe inspiring.  Fox has an appealing view of life, politics and even religion.

This book deals with more of the details regarding his political activism as well as his life as a husband, father & brother.  Fox takes you through his emotional acceptance of his sister K.C.'s, that also suffered a brain disorder (epilepsy) eminent death and how they needed to make the decision to disconnect her from life support.  Fox describes how her brave, successful, yet risky surgery to quell the seizures gave him the strength to undergo his own surgery.

Fox's speech he gave for his son's Bar Mitzvah was very aper-pot for the occasion and gives you the overall tone of the book.  He talks about how he was determined to teach his son how to ride a bike.  He takes his son, strangely, to a baseball diamond to learn how to ride the bike.  During this process, and after successfully riding his bike around the diamond, Fox looks up and does not see his son on the orange clay.  He comes to the realization that his son must now chart his own course.

He is a word-smith, and I hope he writes another book.  The proceeds of the books go entirely to his foundation.  I plan to make a donation to his cause.