This book is a very well written book.  Although it is a bit partisan, you can read it and make your own conclusions as to the the benefits or hindrance of public sector unions.  This book is controversial in the sense that it covers a subject that is considered a third rail by many folks in this country.  I know I will get flack for my comments but will try to be as non-partisan as is possible.

Mr. Factor takes on the idea of public sector unions and the harm they have done and are in-line to do.  I once read somewhere, a quote that was credited to, strangly enough, FDR that said something like, Unions are a monopoly on the worker and the company.  I will start by saying that in NO WAY, am I accusing the true workers that are union members. 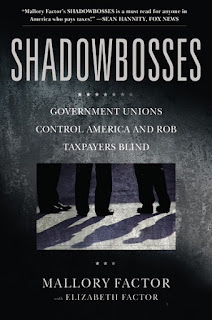 In this book, Mr. Factor exposes the differences between private sector and and  public sector unions.  The private sector unions are somewhat, if that is possible, less pernicious than that of the public sector.  The reasons given in this book will shock you as to the crony-ism involved in public sector unions.  A politician looking to get elected, is funded by hard cash (Donations directly to the campaign) and soft cash (the phone banks, get out the vote efforts etc).  Then once the politician is in a position of power, the unions go in to either redo exiting contracts or unionise new sectors of government and even non-government workers.  If the politician decides after he/she is elected to do the right thing, the union will turn on them and get them out of office by supporting the challenger.

Although I try not to trash Obama and try to give him the benefit of the doubt (although most of time, I end up with egg on my face), I will say that the unhealthy relationship between Obama and the labor unions is scary.

The book compares and contrasts the Union states and the non-union states and their financial statuses of the respective states.  The pernicious "check off" provisions and forced union membership is egregious.    In some states, the unions working with bought politicians managed to  unionise the home care people of that states without even allowing them to choose if they even wanted a union.  One day, they received a letter in the mail saying that from this day forward, they [the care givers] would need to pay the unions the dues.  In other states, you are discriminated upon and your first amendment right of freedom of association (not implicit in the constitution but is implied and was upheld by the supreme court) is trampled on by forcing you to belong to a Union as a requirement for your employment.  Some states allowed for a substitute teacher that only taught one day in school to receive a full teachers pension.

I have been against unions since day one.  They never made sense to me even as a young electrician helper when I was urged to join a union.  I really don't get it.  However, with that being said, I know some folks understand it and support it.  For a private company or a publicly traded company that wants to have unions or allow unions that is fine with me because at the end of the day, they are beholden to the board, investors and shareholders.  If the CEO makes a bad contract with the unions and makes the company lose money, he/she will be held responsible likewise, if the company makes bad choices with the unions, they could face bankruptcy.  With the government though, its a bit different.  The "CEO" do not really care where the money comes from, since the cities cannot really go bankrupt, this forces them to continue to give in to the union's demands or face risks to the public (e.g. Police, Fire striking while no one is available or rather willing to do anything).

Anyone who can, in their minds except the unions bosses to have the monopolistic powers they do while criticising the corporations of the same is at best disingenuous.  The books is a good book and truthfully, I recommend you read it even if you are a union supporter.  I know that my views on the subject may taint the review, but I tried to read the book with an open mind.

Posted by Manny Fernandez at 7:06 AM