This book was recommended by a friend of mine.  When I started to read it, I was a bit confused.  It is a Pulitzer Prize Winning book.  The author's alter ego Nathan Zucherman seems to be giving you superfluous info about his adoration of Seymor "Swede" Levov, a childhood hero of his that was an inspirational figure since they were kids.  Swede is a glove manufacture like his father before him. Zuckernam continues to idolize Swede long after they mature and move on to adulthood.  The author assumes this good looking, successful, athletic guy has had a stellar life and while Zuckerman himself has never married or had kids, it only serves to magnify the affects. 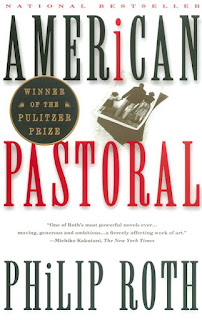 As the story unravelled, we found that Levov has three successful sons and when Zuckernam begins to peel back the onion after finding out Levov died,  he finds that Sweed's daughter Merry is actually "The Rimrock bomber" a radical ant-war Communist  who bombed a post office in their small town and killed and innocent man; a doctor. She has been on the run ever since.  Years pass and it appears that Swede and his wife Dawn are finally getting back to anything resembling normal, we see how he finds his daughter and in no time, his life begins to turn for the worse.

Swede's life becomes unravelled during the course of a day and a dinner where he finds out that his wife has been cheating on him with a friend and has elected plastic surgery for what Swede no suspects to be their mutual friend.  He also finds out that Merry's former speech therapist hid her while she was on the run and never told Swede who was, BTW having an affair with the same speech therapist.  He also finds that his daughter is still alive and has not only been raped but has also killed three others in similar bombings.

The book tells the story of the downward spiral of a seemingly normal "perfect" life.  He did it right, ran a business, married a beautiful woman, had a great house, and his daughter turned out a mess, blaming her parents for all that is wrong and bad in this world. His wife and his infidelity.

The books has comedy as the author uses great characters, sex, sex (yes I meant to say it twice), infidelity, death, murder and destruction.  The ingredients of a great story.   I DID however learn more about gloves and glove making than I ever though I would need to know.

Posted by Manny Fernandez at 8:00 PM