The Case Against the Fed By Murray N. Rothbard

Murray Rothbard cuts through the popular dogma our government expects us to sheepishly buy into.  Rothbard showcases his ability to present the facts in a way a layperson can understand it in lieu of the technical jargon and higher mathematics of the professional economist.  This books covers the creation of money and with it, its subjective value based on acceptance by the masses.  He shows a stark comparison of gold and other forms of "money" as it was adopted by other countries and civilizations and how specifically gold had become the standard of many societies. 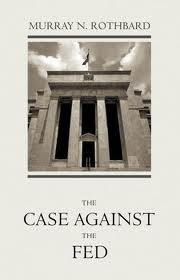 Rothbard explains the detrimental effects of the "Federal" "Reserve" and the affects it has on our economy.  He also breaks down the creation of the "Fed" and the perpetrators of this deplorable organization.  This is an excellent book for any layperson who is interested in understanding money's creation, fractional reserve banking, and the role the "Federal" "Reserve" plays in our economy.  It is not a long book but is replete with great information and insight.

I was never "into" economics or really government insofar as I voted and toed the party line.  However after stumbling on to Dr. Ron Paul and listening to his message, I realized that the "Fed" and the economics of this country play a paramount role in how we "behave" as a country.  I have read some other authors recommended by Dr. Paul, Hayek, Mises, etc and this is my first step into Rothbard's work.  I plan to continue to read his work since I enjoyed this one so much.
Posted by Manny Fernandez at 11:13 AM