Monster: The Autobiography of an L.A. Gang Member By: Sanyika Shakur

This book covers the early life of Crip gang member formally named Kody Scott who subsequently changed his name to Sanyika Shakur.  It gives you a deep look at the allure of "gang-banging"and how these gang members live their lives.  The book is well written although the author appeared to purposely used "big" words.  Some other awkward things were the excessive use of 'overstand' instead of 'understand', but aside from that, the book is well written. 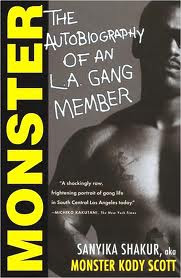 I was shocked to find out that there was more Crip-on-Crip killing than what is normally portraid in the media and other sources.  Additionally, Shakur mentions in his book in a nonchalant manner that his Godfather was none other than Ray Charles.  Amazing that even with those types of connections, Shakur still felt that he could only turn to the streets.  The savagery in this book is difficult at times. Murder is talked about and committed as normally as going and getting a glass of water in the kitchen.

The depiction of prison life and the frame of mind you require to survive that place was incredible.  He talks about the different ways someone looked weak that I would have never picked up on.

Someone wrote a review saying that it seemed that he was not remorseful for what occurred.  I disagree. I had this book in my to-read list for a while and finally picked it up.  I was definitely a change from my usual "type" of book.