Justice on Trial: The Kavanaugh Confirmation and the Future of the Supreme Court by Mollie Hemingway & Carrie Severino


I will start by saying that I am 100% supportive of women coming forward and reporting incidents.  I hope moving forward, these incidents will all but die down, but if not,
at least the environment be as such that makes women brave and safe to come forward. However, being the parent of two boys, I am careful to sign on to the "accusations are
enough to publicly convict regardless of proof". 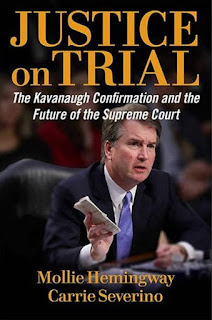 As of this writing, we still have the presumption of innocence.  It seems that the progressive movement is trying to move us away from that. See the Trump, Russia, Collusion,
obstruction circus. We need to ensure that the accused have their day in court with proper legal representation.  Else we will never have an elected official.  Anyone running
for any office at any level could be removed simply with someone (really only a woman) saying they were sexually assaulted. No trial, proof, or anything else; just the allegation
would be enough to have them removed from the ticket.

The purgery traps are an insidious weapon used by lawmakers.  I just read the Papadopoulos book and found it appalling that they asked him about a date and he, not having his
calendar or notes, responded in a certain way, later to be charged with lying to the FBI.

I am concerned that someone or a group of people are perfectly fine with destroying someone's life for the sole purpose of political party and expediency. I think there should be
equal if not more punishment for bringing false accusations against someone.  Not only is it libel and slanderous to the person and can destroy someone's life and family but it
diminishes those who are truly victims of real sexual assault. Any politician found orchestrating the like should be impeached and held to the same. This cannot remain as acceptable
behavior.

Avenatti, the attorney, informed the public that he was representing a victim.  Only to find that she herself had been charged with sexual misconduct, filed false reports and other
discrediting acts.  But then again, look at the attorney.  This attorney is facing over 335 years in prison. Sadly, Avenatti was the liberal media's choice to run for POTUS against Trump.
His client did not have an ounce of believability.  Even mainstream media distanced themselves after it was shown that her allegations were baseless.

It is pretty disturbing how the Senate unfairly and maliciously went after Robert Bork, which created the verb of being "borked" forevermore.  And in hind site, that hearing looked like the Mickey Mouse Club compared to this circus.   The crazy part about it is that if you listen to the speech
given my Ted Kennedy at the time siting what would happen if Borked was confirmed, is exactly what the Democratic Party has become.  I can only imagine what the atmosphere will be like 30 years from now.  It seems like the attacks and total war are getting more violent, more heartless, and without care for anyone.

This book gives a good history on Supreme Court nominees from other administrations. As expected, it goes into detail about the Kavanaugh confirmation and the unsuccessful attacks
that we later saw unravel because of the falsehood of allegations by politically motivated hitmen (or women as it were). I think the women's groups should stand against these false
allegations and rebuke those spewing them as they give a bad name to their movement(s).

Sadly, in 2024 when the Dems take back the WH, they will find a Republican Party that will need to ratchet up the rhetoric and be more vicious than the Dems which will then get
repeated on the Dem side when the Republicans take the WH again. So logically speaking, the situation will exponentially get worse as time goes by.  The new norm is you are guilty as long as someone comes forward, evidence and proof be damned, is a double-edged sword.  No one will be able to hold office and thus we will have anarchy.  If every Congress person, Senator, judge, mayor, governor, POTUS, or any other office is accused, without the need to prove the allegations, then how will anyone be permitted to run for public office, or worse yet, who would be stupid enough to run.