Narconomics: How to Run a Drug Cartel by: Tom Wainwright

Interesting perspective on the drug trade from the jungles of the countries that produce the coca to the streets where street level thugs sell the final product, which is usually "stepped on" a bunch of times. The markup is astronomical. 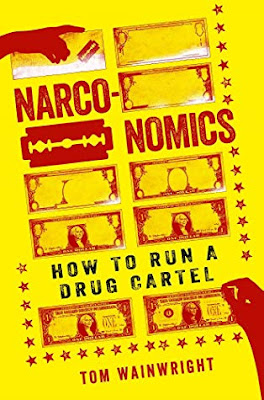 This book also explores a different approach to the drug crisis we have in this country. At 100,000 feet, it looks, walks and sounds like a boondoggle for the U.S.  we have endless amounts of funding that goes into the "drug war" which never really seem to yield any victory of said war. Most of the money seems to fund black ops in other countries and as support for a black market the cartels continue to exploit.   The authors approach looks at the demand side and not the supply side.

The author uses an analogy about a cow and the price of a steak at a steak house.  If you take the "street price" of the steak vs the price of the cow, the profit is huge. Therefore, cocaine in Columbia sitting on an airfield, is not worth the value of those kilos on the streets of the U.S. Back in the day, you could buy a kilo of cocaine for around 17k.  You could step on it and yield 1500 grams. Selling it on the street, would yield $120,000 which is $103,000.00 in profit. And in case you are wondering, I was not a drug dealer but knew many of them growing up in Miami.

This is definitely a different kind of book.  To me, being a libertarian, I believe drugs should be legal.  Not just from a personal decision perspective, but a huge incarceration problem we have today, as well as the power and money the cartels are taking.  Author talked about designer drugs that people are creating to combat the legality problem.  These drugs are truly dangerous.  Anyone that lives in Miami or monitors the news here, will remember a few years back where there was a man eating a homeless man's face in a Bath Salt bing.  I say, we know how weed and cocaine make people act, "the devil you know...."

The book covers history of famous drug kingpins I grew up hearing about (Lehder, Escobar, Ochoa, and Griselda Blanco).  The Mexicans pretty much took over after the crack down in Columbia (no pun intended).  The book covers the way the Mexican cartels formed franchise like organizations and took it to the next level.  Today they are extremely strong and powerful.

The book is well researched and presented in a way that flows and keeps you engaged.