Anyone who knows Dan Bongino knows he is a regular guest on Fox News and is known for his Conservative views. You would expect him and his book to be extremely partisan, however you would be wrong.  Bongino talks about his career path that brought him to the prestigious PPD (President Protection Detail). Bongino talks about his childhood with a "stepfather" and how his mental, emotional and physical abuse drove him. 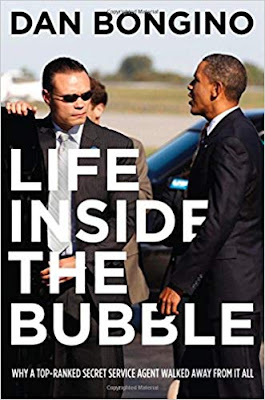 I was pleasantly surprised at the chapter regarding President Barack Obama and how he felt proud and honored to be part of it.  He was also very gracious and congratulatory to Obama in spite of his political differences and how nice they were with him. I was additionally surprised that Bongino ascribes, as I do, to Austrian Economics principles.  He also shows signs of Libertarianism although more Right leaning.

Bongino blows the lid off of the mainstream media's report about death threats to President Obama and its increase to over 400%.  I would believe that about Trump but not so much about Obama.  I enjoyed reading about missions I remember watching of TV as most Americans.   Bongino talks about how the new political landscape is more about "Style not substance".   This is sadly true in my opinion.