Obstruction of Justice: How the Deep State Risked National Security to Protect the Democrats by Luke Rosiak,

Wow.  Just wow!  This is certainly a travesty of justice.  This book only shows you that there certainly is two sets of rules.  The Gull of these politicians calling for Trump's head and presidency
because of collusion and obstruction and then you see this....  well, lets just say there is a high level of hypocrisy.  This is a well wriiten, well researched, engaging, book.  It is non-partisan although
the book calls out the disfunctional, corrupt, Democratic Party and the complaisant inept Republican Party.  Incredibly, the Democratic Party is either the most corrupt political party or the the most inept, or possibly both.  Incredible how this is the party that wants to take more power from the people and push Socialism.  These people should not only not have that power but should all be investigated, tried and convicted for high treason. 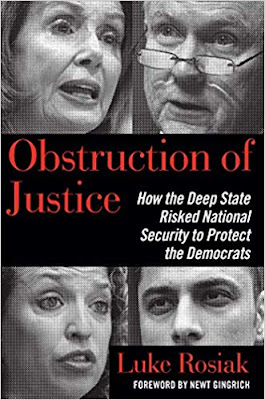 Risiak covers, in detail the crimes of, the corrupt Awan family which had unauthorized access to Democratic Congressmem and Women's login and passwords.  I have been in the IT field for over 28 years, and I can  tell you that this stinks to high heaven.  From a policy and procedure perspective, the Democrats have shown either complete ignorance or contempt for the policies that I can assure you they have signed off on.  No one should EVER give their credentials to anyone, for any reason.  If the IT person needs to work on your account, they can change you password and then have you change it.  Ideally, they would have YOU log in and do a GoTo Meeting, WebEx, or something of the sort if it is absolutely necessary.  Not even sure why Democrats or Republicans are able to higher their own IT people.  Congress should provide IT staff that have been thoroughly vetted and have the proper clearance. Incredible that you read this book and you see the pattern:  Hillary did not know the (c) meant confidential, destroyed the server and devices even after being subpoenaed (obstruction, the real one), Debbie Wasserman Shutlz did not know that she could not use Dropbox and then blames
IT for not doing something about it, her IT people lost a server and all the data on it, devices, etc, then under the same inept and corrupt DWS, the DNC supposedly gets hacked and they never provide the server to the FBI for them to do an investigation rather the FBI takes the work of Crowdstrike.  The FBI is equally complicit in this issue.  They have a lot of work to do for me to trust and respect them.  They have showed time and time and time again that they at worst or corrupt as they come
and at best have been careless and inept; either one being disturbing.

This case was probably the worst show of corruption, cover up and and overall, a truse travesty of justice.  I truly hope that our current AG investigates this further and although I am not a lawyer, I hope that if the AG can prove that there was corruption at the highest
level, that they can resind the BS outcome and whitewash of the crimes commited by the Awans.  Republicans do not get a free pass on this one.  In my opinion, they are complicit in this travesty and should be dealt with in conjunction with the Democrats.

How someone as corrupt as the Awans were able to stay in the employ of the government by way of the Congress people, is astonishing.  They should have been doing ongoing background checks as in spot checks to ensure that there people are not falling out of compliance.  This is why they run your credit again before you close on a house to make sure you have not done something stupid before you close.  This is normal in the IT world.  I ran a Security Operations Center and we had to constantly check the employees backgrounds and credit to make sure they were not a risk.  All companies and organizations have written policies and procedures, especially public companies due to the very same idiots in the House and Senate (Sarbanes Oxley), HIPAA, GLBA, PCI and others specific to them where it is required to have a written policy and procedure and PROOF that ALL employees have read and understand the content.  Most organizations to pop quizzes on the same policies and procedures throughout the year and post follow up to any changes.  If the policy says NO House data on any outside servers, they government does not even need to block Dropbox (although they should), but it would be impossible to define each and every service that is an "outside server" (e.g. Dropbox, Google Drive, One Drive, SpiderOak, Box, Crashplan, Backblaze, Glacier, iDrive, Apple iCloud Drive, etc,).  That would mean that the government and organizations would need to track every single product that gets released and ensure they update their policies and that the users sign it. No data on outside servers is understood as ANY server that is not controlled by the government.  If they can not figure that out, they do not belong in D.C. and certainly should not be in control of anything or anyone.

I hope the Democrats and the Republicans voters start to hold their own accountable.  Remember, if you change the D's to R's and the names to Republicans, you would be demanding their heads on a platter.  I mean, look at the Trump investigation(s); they continue even after Muller came back and said no collusion.  It is as moronic as the Birther movement.  Since the Dems are in a "special council" mood, they should assign others to this and the many other cases of corruption regardless of party.


Posted by Manny Fernandez at 2:31 AM