This was a great book.  Andrew Cuomo reminds me of Michael Avenatti; an American attorney, best known for his representation of adult-film actress Stormy Daniels in her lawsuits against President Donald Trump, and for his felony extortion conviction involving sports apparel company Nike. Avennatti was CNN and MSNBC's pretty boy.  He was The Chosen One and there was talks about him running for the big seat.  Of course we learned later on and frankly, just in time that he was a piece of crap, criminal with little to no moral compass.  De Blasio is just a communist activist posing as a mayor.  Under De Blasio's control, New York City has devolved into a cesspool.  Anyone with the means have performed a mass exodus from New York.  De Blasio is actually worse for New York City than Cuomo is to New York the state. 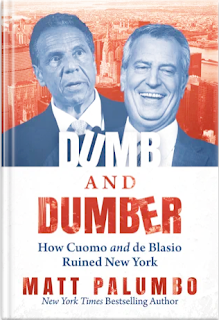 Make no mistake, Andrew Cuomo should be in prison today.  If only for the COVID response.  The irony is that Cuomo himself is responsible for the lack of ventilators and PPE for HIS state.  He made comments about how the Federal Government, or better yet, The Trump administration for not being prepared.  That was mighty rich of him.  Then when the Floyd riots are in full swing and Cuomo and De Blasio refused to act, Trump threatened to bring in troops to quell the violence.  This is where Cuomo says that "Trump has not authority". So authority to step in with hospital ships and centers, PPE and ventilators, because Cuomo lacked the leadership, but not to control the violence and deaths caused by the Democratic's private street army of BLM and ANTIFA.

Now reports of sexual improprieties by Cuomo have been released, over 6 as of this writing.   Of course there is no outrage by the MeToo movement since Cuomo is a useful idiot for the Democratic Party.  I have not even spoken about the cover up by Cuomo and his people to reduce the number of deaths that he was already responsible for.  He should have received an award for being the most prolific serial killer killing more than 7,000 people.

If I have learned one thing during these past 20 years that I have somewhat followed politics, when someone is pointing their finger at someone, there are three fingers pointing back at them.   This is a short book packed with even more reasons to hate Cuomo and De Blasio.

Posted by Manny Fernandez at 9:17 AM