White Guilt: How Blacks and Whites Together Destroyed the Promise of the Civil Rights Era By: Shelby Steele

This was truly a great book.  The perspective of this author is precisely what has been in my head, but could never really articulate it.  Steele is able to, obviously in a more eloquent way than I ever could.  The issues we have today, in my opinion, is that people do not use critical thinking and too much emotion is included when making decisions. 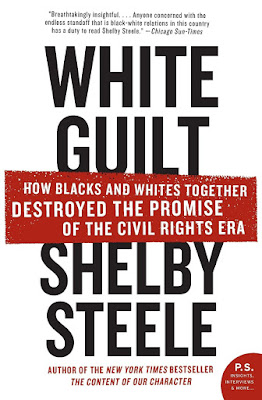 This book reminds me of a Tweet by Candice Owens "Phrases like "white privilege" are just a modern twist on white supremacist ideology.  Asking me to believe in "white privilege" means asking me to accept "black inferiority" - to look at a white person and recognize that I am less than them in this world."

When I was younger, (many moons ago), I tried our for the Hialeah Fire Department.  When I filled out the information and the form, I was told that because of "affirmative action" I would not need to score an 80% like white people and would only need to score a 70%.  I remember feeling offended.  The fact that "they" thought that I was incapable of scoring 80% because of where my parents were born was humiliating to me.  Another example of this type of belief is in the 1997 movie "GI Jane".  In the movie Demi Moore is the first Navy Seal candidate.  She wants to be treated as an equal and does not want accommodations.  In one of the obstacles courses, there is a step for her set up as an accommodation for her being as a woman.  She kicks it away.  The point is equality is just that; equal under the law and under God.  Although we have had some semblance of this since the 13th amendment, today and quite frankly (per Steele), since the 60's, this has been attained at the cost of White Guilt.

Remember, Money and Power is in the fight, NOT the results.

The book is extremely engaging and I finished it in a couple of days even though I had a busy week.

Posted by Manny Fernandez at 4:27 PM