Ticking Clock: Behind the Scenes at 60 Minutes By: Ira Rosen

This book covers a lot of ground.  The first half of the book could have been called "How much I hated working for the Wallace family".  Rosen goes on and on about Mike Wallace and his son Chris.  It does validate a lot of the rumors and assumptions I heard and made about some of the people he worked with and for.  I think he could have been more critical on the Clintons but you expected it based on the tone of the book being left leaning, albeit covertly vs overtly for the most part. 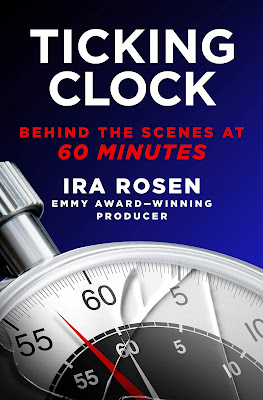 Rosen's career behind the scenes has been incredibly fulfilling for him I would imagine.  He was involved in covering many of the huge scandals our nation has seen.  Some of them, I remember watching from the other side as a viewer.  It is very interesting to see what went into producing a great show that at least I enjoyed.  I am never disappointed when I read these books to find that some of these folks are great friends with some people you would never imagine.  For instance I read a memoir from Tommy Davidson from In Living Color and one of his close friends was Michael Bolton.

In typical liberal attack, no book is complete without a thorough lashing of Trump.  Obviously Rosen has an axe to grind with Trump because of Trump purchasing multiple country clubs where Rosen was a member.  It is sad because although I agree that Trump can be obnoxious and rude, I think he did a good job as POTUS.  Rosen writes that there was no wire tapping against Republicans, this does not make it true.  Devon Nunez and other Republicans were in fact wiretapped.  Additionally, known false information was provided by FBI and other government agencies to the courts, and Trump and his campaign were 100% spied on.  The fact that the courts approved it based on false information is irrelevant.  The fact that knowingly false information was provided, and provided by a political rival that was under investigation is chilling and should have landed all parties involved in prison.   Of course he mentioned Charlottesville.  Anyone worth their salt, would know that this is a bogus allegation and if you have an inch of integrity and read the entire transcript and in context, you would see the same.

I think the most comical things he said was the he thought Trump had the beginnings of Alzheimer's.  Curiously absent was any comment on Biden and his cognitive decline.   His comment about anti-fascism and saying "I wonder if she was thinking about Trump" in Chapter 33, Is comical since it is known that ANTIFA uses Fascism to force their "Anti-Fascism" rhetoric.

The book is great.  I enjoyed it and recommend it.