The True and Detailed Racist History of the Democrat Party: 1830-2020 By: Robert R. Zerfing

This was a great "book" (more like a pamphlet) pointing out the Democratic Party's racist foundations in the past and how that has mort'd into the version of racism we see today. 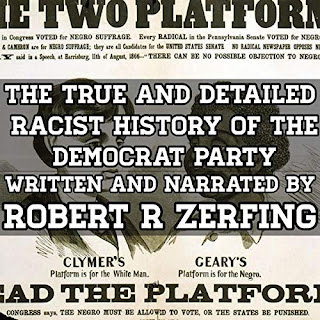 The facts are that the Democratic Party has been on the wrong side of history most of their existence.  Any grade school Democrat will parrot the "Dixiecrat" lie which states that the two parties switched, however this is a complete fallacy.  Only one member of the Democratic switched parties.  Sadly, the "Fact Checker" web sites are completely false.  They left likes to "white wash" their hands from the travesty of humanity they are sadly known for.  This is why you see the insatiable lust to remove all history where well-known Democrats are identified.  The Democratic Party was the party of Slavery, Jim Crow, KKK, they were 100% opposed to the Civil Rights Act of 1964, and anywhere else where they should have either opposed or supported.  Even today, the Democratic Party supports and pushes self-segregation.  The Left's dream to continue to segregate people and with their constant identity politics, this has worked for them.
Columbia University just announced that they will be holding separate graduation ceremonies for blacks, whites, latinos, etc.  Think back to the 50's, who would have rejoiced from segregation.....you got it, the Democratic Party.  They still are enjoying and rejoicing today for the same thing.
Political Parties are the most putrid thing we have in this country.  It forces weak-minded people to follow destructive means just so they support the party.  The parties, don't care about the people insofar as the want the votes.  Buck the system, become an independent.  Make them work for your vote.
I read a book recently and it talked about how the Black community has thrived in sports and music.  The point was that a young black child will go to the basketball court and he might suck.  His peers, parents and those around him will instruct him that he needs to practice more and "put in the time".  However if that same youth is struggling in school, they will tell him/her that it is because there is racist powers around them trying to keep them down.  That they are incapable of doing well because of the "white privilege" and systemic racism that is making them a victim.  This is crime that has been yet again committed against the black race.  Rather than support and affirm that with hard work, anything is possible, the left continues to let the black community know that the Whites are superior to them and that they will NEVER be to the same level with the grace of the white people ALLOWING them to.  I don't know about you, but to me, that is so offensive on so many levels.  Yet we allow it to happen.

Posted by Manny Fernandez at 7:43 PM