Be the People: A Call to Reclaim America's Faith and Promise By: Carol Swain

What a refreshing book to read.  I normally shy away from books with too much religion as I have my own faith, and much like my politics; it does not fit neatly within the confines of a party or a religion as it were.  However this book is a different kind of book.  Ms. Swain is a very smart woman.  She dropped out of school and obtained her G.E.D. (General Education Degree).  She, however was encouraged by co-worker to return to school which she did.  She later became a professor at Princeton and later at Vanderbilt. 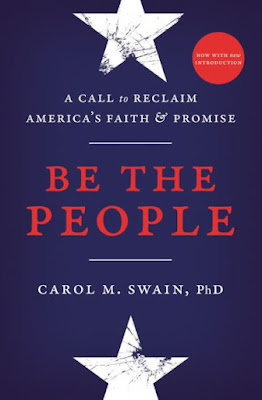 In this book, she weaves through a Christian and Constitutionalist perspective.  She is well versed in both subjects and gives you an even exposure to both.  The book, although originally published a decade ago, still hold true to the Constitution and addresses things that now in hindsight, could have been avoided.  Her view coming from a black woman, that grew up in poverty, was able to go back to school and become a tenured professor at two of the most prestigious universities in our countries, who was a Democrat, Independent and a Republican, is extremely educating and worth paying attention.  She has a unique position to see things from a perspective not had by some other activist authors.

Swain covers everything from abortion to racism and everything in between.  Her perspective is that the only chains that bind the different races are in the mind.  We now see mixed race marriages more than ever before.  We have seen a black President of the United States, a black Vice President of the United States, Congressmen/women, Senators, Governors, Mayors, entrepreneurs, millionaires and billionaires, men and women, all PoC (People of Color), yet today race is the cudgel used to defeat any thought or speech that differs from ours.  We now see blacks self-segregating.  This is insane.  Its like we are going backwards and not forward which is ironic since the "progressive" movement is the one behind this new self-racism phenomenon.

I recommend this book to anyone looking for a rational view of the issues affecting us today in this country.  And although we have seen a retrogression from the time of its original publishing, it can help in normalizing the insanity we are living in today.  It has become meaningless to be called a racist today.  That pejorative is thrown around when people are arguing without facts and want the other side to stop.  It is meaningless now.  I equate it to someone calling me dumb.

Posted by Manny Fernandez at 10:40 AM