The Deep Rig: How Election Fraud Cost Donald J. Trump the White House, By a Man Who Did Not Vote for Him By: Patrick Byrne and Patrick M Byrne

A short but concise book on the irregularities of the 2020 elections.  In the absence of reading this book, I felt with every fiber that there was outright fraud in the 2020 election. There has never been a doubt for a single second that that statement is true. However I do recognize that the process, although from a foundational point of view was fraught with fraud, did complete Constitutionally and Biden is President* 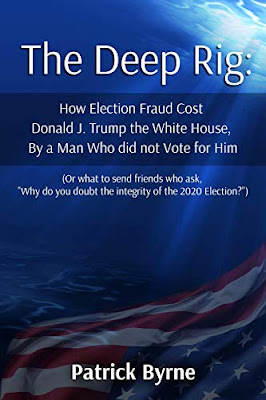 If there is one thing that I feared before COVID but was sadly and painfully confirmed after this past administration but more specifically 2020, is the level the left will go to obtain and remain with power. Even if you do not agree with me, I can clearly say and believe it that Donald Trump portrayed himself as an A-hole. He was brash, in your face, at times rude, braggadocious  and his delivery left a lot to be desired. However with that said no one can argue that he did more for the American people especially PoC in spite of all the fake news that was spread than Clinton, Bush x2 and Obama did combined.

The left spent the entire four years doing exactly what they complained about Republicans doing to Obama's for 8 years (which was false) but on steroids. If  the media had any standards, they would have canceled everyone who spread the lies about Russia, Ukraine, Pee-pee report (a la Clinton), and the countless other lies that were told and still told about Trump.

Regardless of if you are for Trump, Biden, or anyone else the integrity of our voting system is paramount to have a free country.  I wish that the it was Trump that would have won under suspicious circumstances if only for the left to engage the "Moral Superiority" as they did BTW for years leading up to the 2020 election about voter fraud.  Sadly, the left has take the "kissing my sister counts" way of thinking.  For years after 2016, we heard "not my President" and "Constitutional Crisis" and "illegitimate President".  Apparently it was not so much what they believed had happened but who benefitted from the alleged fraud.  I can tell you 100% that if Trump would have won by cheating, I would be the first signature and vote for having him removed and thrown in prison, regardless of how I feel.

Byrne explains who those key counties and cities were ironically the ones that stopped counting mysteriously, had rogue WiFi connections, traffic to and from those voting machines to outside countries, laws that were changed illegally at the last minute and the worst part is that NOW after President* Biden is President*, the very same that used the media and social media to silence any deviation from the narrative.  If the left was so sure of their win, why not shut the Trump supporters up by allowing and joining in the audit of the election and the ballots?  Why would they fight it every single step of the way and why would they attempt to pass laws that further the strange issues we saw during this election; things that they were concerned about before the 2020 elections.  Why the change of heart?  What changed?

The other is not a Trump fan, if anything the opposite is true.  However he seems to be deeply concerned with the integrity of our voting system which I can appreciate.  I do not want my libertarians to game the system, don't want the Republicans or the Democrats to either.  It should be a mutual thing we ALL want to see.  Mayor Giuliani was not the man to have next to Trump.  He was outside of his comfort zone and it showed.  I use to like him.  I did not though when he was with Trump.  This book only confirms what I always thought about him being a drunk and not up to the level he needed to be.

This is a great book.  I recommend it to anyone that is willing to at least read a different version from the narrative that was put out by the putrid media and controlled by the putrid social media and big tech companies.  We have seen how astonishingly wrong the media has been on everything Trump.  Why would anyone believe anything they say?  Even on the HCQ.  How many people lost their lives to COVID because Trump made the colossal mistake of saying that it worked.  How many people hated Trump so bad that would have allowed their families and friends to die instead of conceding that maybe, just maybe he was right?