A fantastic book. We always talk about the PC culture and how toxic it is. But I was surprised just how pernicious the origins are. I know it's very cliché today, but today we are seeing the Orwellian dystopian world from his classic book "1984" coming to life. Anyone who has not read that book should stop reading now and either buy it, check it out at the library or ask a friend and read it.  He (and I mean that pronoun in the general term not the specific 🤦🏼‍♂️) who controls the speech controls the future. 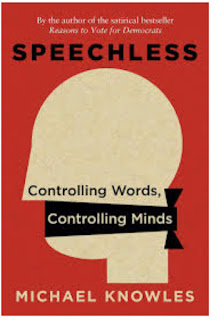 We have seen meanings of words changed, villainized, weaponized and distorted to meet a particular and specific perverted agenda or narrative. Sadly the political left is the main culprit in this attack on words.

Years ago when same-sex marriage was in the headlines, I had a conversation with my then 80 year old father. He is a Cuban and very Christian man and to him homosexuality was a nonstarter.  I remember telling him "Dad, even if they are not "married" they are still having sex.  This is not about homosexuality but rather equal rights under the law".  I did tell him that the Christians, the biggest group that were against same-sex marriage should have changed the argument. What they should have said is that "marriage" connotes a religious component and thus should be maintained as such but that the legal aspect of two people, regardless of their sex and now (although I do not buy into it) their gender, should be called a civil union and that civil union under the eyes of the law should be equal while maintaining he original meaning of marriage. The argument became a red herring to pint the Christians as homophobic and bad people.  All heterosexual "marriages" and thus the term itself would be maintained by the religious meaning of it while we ALL adopted the civil union status to be "equal in the eyes of the law".

Today, we have seen how toxic this PC culture has become. These SJWs (Social Justice Warriors) literally sit around trying to find what the new offensive term de' jour is going to be. How they are going to trigger the non-pc crowd

I am always shocked to see the left, which always pushed the narrative that they are much smarter than the right follow along like sheep just to virtue signal. That was very apparent during the Trump administration where saw the Trump Derangement Syndrome become a reality. Never have a seen a group of people go out of their way to discredit ANYTHING that man said regardless of it being true or not; the most notable was HQC for the treatment of COVID.  How many people lost their lives or sent their loved ones to their demise for vilifying HQC and thus making it ALMOST a crime (at least in Social Media law) to even mention it?

Even Bill Maher,  a strong supporter, advocate and proponent for the left has seen the damage done by the PC and cancel culture and now regularly calls it out. Comedy is officially dead.  No longer can we go to a show and laugh about ourselves and others without a bunch of childish  snowflakes making a scene and messing up for us adults. The only thing that can be made fun of these days is Trump, his supporters and Christians and that material gets covered in media everyday. It's old and played out.

If you read one book this year, let it be "Speechless" by Michael Knowles.

Posted by Manny Fernandez at 8:16 AM