The Double Life of Fidel Castro: My 17 Years as Personal Bodyguard to El Lider Maximo By: Juan Reynaldo Sanchez and Axel Glyden

This was a great book in more ways than one.  This book, written by Juan Reynaldo Sanches, a former Fidel Castro's "inner ring" of security is an amazing inside look at lies of Fidel's life and lifestyle. 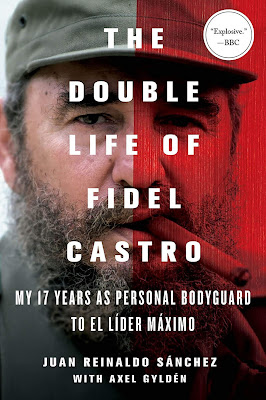 Just as every dictator before him, Fidel's incognito Capitalist lifestyle was at odds with the rhetoric he spewed.  This is nothing new.  You do not need to go to Cuba to see the lies of this Socialism and Communism rhetoric.  Right here in the U.S.  You had Bernie Sanders that would constantly pontificate about "Millionaires and Billionaires". Ironically, his rhetoric changed when it came out that he owned multiple million dollar homes, made millions on his book and drove expensive cars.  Highly different than the austere life style he preaches about.   Also we see people like the "Trained Marxist" Patrice Khan-Cullors who constantly ranted about the rich 1% and the evils of Capitalism until she spent millions of dollars buy 4 homes for herself with the proceeds of her "organization".  There are countless examples of those who talk the talk, but do not walk the walk. You constantly see these spoiled kids studying in their Ivy League schools paid by their parents that have sacrificed themselves to put their kids through college, sipping their Starbucks, wearing their Birkenstocks, driving their BMWs all the while complaining about Capitalism.  Anyone who tells you that Capitalism is not the best system in the world, you are either dump or complicit.
Fidel lived the life of a Capitalist billionaire.  He had people waiting on him hand and foot, had multiple homes throughout the island, billions of dollars in offshore accounts, and was a narcissist evil man.  No one, including his family were safe from his brutality.  I personally have family and friends of the family that disappeared during the "revolution" never to be seen or heard of again.  My father left the island when Fidel took power leaving behind several properties seized by the government, money and my mother and two sisters.  He came to the U.S. when there were signs saying "No Cubans" similar to how Blacks were treated.  He worked three jobs to claim my mother and sisters as well as other family members.  They came in legal and worked hard.  They lived in New Jersey, were it was cold and miserable.  They left possessions, family and friends behind to flee this disgusting tyrant.  I think this is why I oppose Socialism and Communism so much.  Seeing what it did to me family here and worse what they did to my family there make we privy to a lot of information the talking heads today conveniently leave out.  Socialism and Communism is a cancer wherever it is tried.
The book gives you the inside scoop on the methods and procedures Fidel used and how he funded and orchestrated those "regime changes" that our very intelligent Congresswoman Alexandria Ocassio Cortez loves to blame on the U.S.  He was also a gun and drug smuggler.  He had his closes people killed because they "knew too much". Thankfully he died.  Sadly, he lasted a very long time and with it, made the poor people of Cuba and the oppressive Human Rights violation which the media does not report on, suffer and still do.  I would ask anyone that feels that this "revolution" he created is a good thing, go to Cuba.  Not as a visitor with money.  Go live as the Cubans do.  Make use of their "free healthcare" and "free schooling". Doctors in Cuba make more money working a side hustle than being a doctor.  There you get to go to college for free however you do not study "gender studies" or some other useless major.  You study what the government tells you to study.  You are not free at all.  Ironically, those that love to criticize this country would be shot and killed for voicing their opinion in a Socialist or Communist country.
Publisher ‏ : ‎ St. Martin's Press; 1st edition (May 12, 2015)
Language ‏ : ‎ English
Hardcover ‏ : ‎ 288 pages
ISBN-10 ‏ : ‎ 1250068762
ISBN-13 ‏ : ‎ 978-1250068767
Item Weight ‏ : ‎ 12.8 ounces
Dimensions ‏ : ‎ 5.76 x 1.01 x 8.52 inches
Posted by Manny Fernandez at 1:06 PM