The Year of Dangerous Days: Riots, Refugees and Cocaine in Miami 1980 By: Nicholas Griffin

A fascinating look at the 1980's in Miami.  I was alive during this time and witnessed the good, the bad and the ugly of the 80's.  In this book, Griffin describes in detail the tragic case of McDuffie who was murdered by the police.  I remember the riots.  I remember them vividly because my father, never seeing something like that was terrified and gave me my 20 gauge shotgun to sleep with in the room.  He told me "if someone comes through that window, you know what to do".  I was mortified.  I never really heard about the details of the case, only that he was in fact murdered. 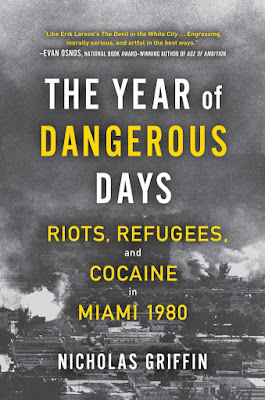 Sadly, McDuffie was beaten to death and the police officers were to blame.  Although he was driving over the speed limit, was shutting off the light to try and outrun the police and driving with a suspended driver's license.  Whatever the case may be, the police were wrong.

As is still the case today, the response to some tragedy is usually worse than the original issue.  This is precisely why I feel that protesting that includes blocking streets where people are not involved, don't want to be involved, and/or don't even care about the issue is so dangerous.  Michael and Jefferey Kulp who ran their car through one such protest leaving a young girl pinned to a wall.  However Michael and Jefferey Kulp were tortured for hours.  Jefferey getting shot, stabbed, concrete blocks slammed on his head, his ear and tongue cut out and much more.  It was truly medieval.   The reality is that families lost loved ones on all sides of this incident.  Violence begets violence begets violence.  No one wins.  The McDuffie riots, in my opinion, did more harm to race relations during that time than any other issue of its time.  Whites and Hispanics remembered the horrific scenes on the streets of Miami. Many families told their kids to be careful around black people as they could not be trusted.  This was not the case at my house but I remember a lot of friends where that was the norm.  I am sure, many Black families also thought their children about the dangers of the police due to the McDuffie killing. It would be nice to all acknowledge this and try to move on.  Seems that is not the case and we have only doubled down.

Never in my days, did I ever think I would be alive to hear about separate black and white graduation, dorms, businesses, etc.  Today we are self-segregating.  Society in the name of "progress" has urged people to identify with a race and create echo-chambers, very much like what we see in prisons where you have Blacks, Whites, Hispanics, etc and they must fight for a manufactured issue created by those in power that have a vested interest in keeping everyone separate and stupid.  Hopefully we can pull through this and stop flushing motion of this society.

Additionally I learned about Hector Sanyustiz which I owe my family to.  Because of his valiant and desperate move to ram the gates of the Peruvian Embassy in Cuba which was the impetus of the Mariel Boat Lift which is how my wife and her family arrived in this country.  Many people know about the Mariel Boat Lift from either family or even the movie Scar Face but very few that I have asked knew anything about Sanyustiz.  Many of my family members arrived from Cuba during this time and it is probably the only thing I am grateful to Jimmy Carter for.  My former brother-in-law made the voyage across the Florida Straits to Cuba to pick up his brother as well as my uncle and son.  I remember being glued to the TV to see if there were any updates to their voyage. 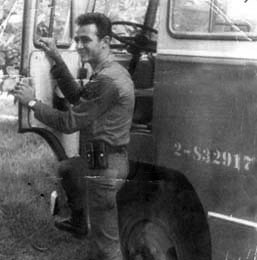 The truth is there were a lot of mentally unstable people released from the sanatarium and prisoners released from prisons, but most of the folks that came here were hardworking people looking to better their lives and the lives of their families.  I remember being introduced to "El Granizero" (The Snow Cone man) that created a snow cone cart our of a bike and some wood, the "Churro" man that would make Churros outside of the Zayres parking lot in Hialeah, and the "Biandero" which was essentially a mobile fresh market where the "Biandero" would pull up in your apartment building and start yelling "Biandero.. La Bianda barrata, barrata, barrata".  In Cuba, there were no parts for the American classic cars.  The Cubans were so resourceful they would manufacture their own parts.  However there were the drugs that was "the lure of easy money.... it was the smuggler's blues" ~ Glenn Frey.

We had family and friends that became millionaires overnight.  The strip bar trips where we would drop 10s of thousands of dollars, nightly dinner at the Forge in Miami Beach, boats, trips, cars, motorcycles and anything your mind could think of.  I remember that for 2.5 years, I did not own a car.  I would grab one of the many cars available (Ford Bronco, Cadillac Fleetwood Brougham and El Dorrados, AMG Mercedes Benz, Porsche 911 Carrera, etc).  Many smart dealers made money and used it to go legit but most allowed greed to take them to jail or the cemetery.  My father sold airline tickets from the house.  He made a lot of money selling these people tickets for world tours.  The club scenes was crazy.  Walking into the bathroom, you would see cocaine everywhere.  Dude would be snorting lines off of the urinals with $100.00 bills.  Miami Jai-Alai on Saturdays was the normal thing to do.  Thousands of dollars were dumped there.  All the drugs you wanted.  We would go to Broward County as a teen and hit the teen clubs with loads of cocaine.  As ugly as I am, I was like Brad Pitt.  I scored probably more than he did.  I enjoyed the life style but new that hanging with these people would soon bring my life to an end.  When they offered me $10K to go to Haulover marina to trailer a boat that was in the water and once I delivered it to its destination, I could keep the brand new Ford Bronco, I knew I was being set up.  Got away from all of it.

The reality is that Miami was a shit-hole.  No one wanted to be here unless you were 100 years old.  It was a retirement community.  The drugs built Miami.  Many legitimate businesses made a lot of money.  Best thing was not to ask if it was blood money.  I had  carpet business.  There was a customer that lived on Brickell Key.  I would replace his white carpet in his giant apartment every month.  Regardless of what the situation.  Once, he was traveling the entire month.  No one was even in their apartment after I installed the carpet the month before.  I asked him if he wanted to skip this month and he said NO!!!  Come put some new carpet.  I made 10's of thousands of dollars from him alone yearly. 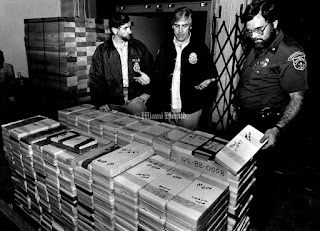 Posted by Manny Fernandez at 7:04 PM