Along the Way By: Martin Sheen and Emilio Estevez

Amazing story of father and son.  Ramón Antonio Gerardo Estévez AKA Martin Sheen and son Emilio Estévez take you on a journey through their lives.  I was never a hard core fan of any of the Sheen/Estevez clan until this book.  WOW!  What a life young Emilio and the rest of his brothers and sister lived.  They were jet-setting all around the world while their father Ramon (Martin) was on location filming movies. 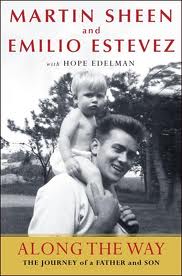 It is written in a way where the father reflects on a time period and then Emilio does the same.  You get to hear both sides and how Marin felt when Emilio was coming into his own and how Emilio felt during the same time.  Fame, travel, and money notwithstanding, I find parallels in mine and Emilio's life.

Amazingly, his youth in Malibu was surrounded by the up and comers Rob Lowe, Sean and Chris Penn, Robert Downey Jr that lived on Emilio's block and they grew up together.  Also during the casting for The Outsiders, Tom Cruz lives with the Estevez/Sheen family.

I found myself re-watching Apocalypse Now, Bad Lands, and The Outsiders with an entirely different view of the movie.  Knowing some "insider" information gives you perspective on the films.  I plan to watch "The Way" which inspired this book.

What a great book for any father to read.  I have already started putting certain things into practice with my kids.