Bailout: An Inside Account of How Washington Abandoned Main Street While Rescuing Wall Street by: Neil Barofsky

I will begin by saying that I was and still am against T.A.R.P..  With that being said, it was passed and we had it.  Neil Barofsky is a Democrat and donated to the Obama campaign in 2008.  He was nominated as Inspector General of T.A.R.P. by President Bush and was confirmed by both sides with barely any incident.

Barofsky nails it in this book.  He starts by being critical of the Bush administration and then states that he is hopping that the new administration (Obama) and his appointments will be better in trying to create the atmosphere of corruption that would allow T.A.R.P. recipients to game the system.  Those hopes were crushed by Timothy Geithner and his minions. 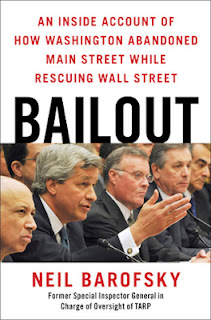 I am not saying the Bush and Obama were directly involved, but at a minimum, it makes them inept and indirectly responsible with what happens on their watch; especially something as big and egregious as this.  Barofsky breaks down the Troubled Asset Relief Fund (TARP), Public Private Investment Program (PPIP), roubled Asset-backed Loan Facility (TALF) and other boondoggles by our Federal Government. He describes in layman's terms how the system was gamed and by whom.

He describes encounters with Treasury officials, Congressmen, and Senators and how he informed them and warned of how the system could be and would be gamed. Those warnings fell on deaf ears.

Required reading if you are interested in what happened and worst yet, how the more things change, the more the stay the same.  We are doomed.