Aside from numerous inaccuracies and "bold fresh" (pun intended) lies coupled with the selective blindness by the author; the book was OK.  O'Reilly suffers from what so many today suffer; he suffers the apotheosis of Lincoln syndrome.  To O'Reilly, Lincoln can do no wrong.  I have read numerous books on this subject and know, beyond a shadow of a doubt, that the "Civil War" was indeed not fought for the purpose of freeing slaves.  Anyone that does not call out Lincoln for being a racist of the highest order has not done the most basic research on the subject. 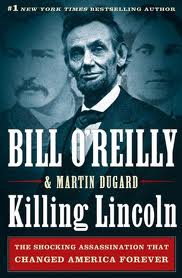 The first 5-6 chapters reads more like a Civil War book than that of a Lincoln assassination book.  Then, the author takes off touching on Mary Sarat's involvement and painting the conspirators web.  O'Reilly leaves much of the details out and on NUMEROUS occasions, leaves facts out or adds theories and conjecture which have already been disproved and presents them as fact.

O'Reilly is wrong on his assertions that presidential assassins plan their "hits" for a long period of time.  This is not the case of any of the book I have read regarding such Presidents as McKinley, Garfield, Lincoln, Jackson and even Kennedy.

I enjoyed the book because I happen to love the subject matter, however there are better books (Please see my review of American Brutus by: Michael Kaufman)

The book is fairly safe for a young reader 12 and over.