An American Son by: Marco Rubio

Well Well.  Mr. Marco Rubio is certainly an interesting person.  I was attracted to this book because he is my same age and we grew up somewhat the same way as sons of immigrant exiles of  Fidel Castro's regime and the long lost country.

The book details the plight of his parents and grandparents as they struggled to provide for their families both here in the US as well as in Cuba prior to coming here.  Rubio details his life as a football loving, specifically Miami Dolphins, political junky.  He states in the book that he was following the election of Jimmy Carter.  I consider myself to be somewhat of a political junky but do not really remember being interested at that age. 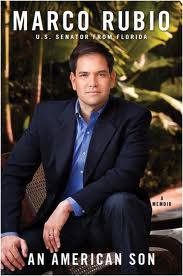 Rubio gives the impression of a spoiled egotistical calculating person.  Although people may say that is typical of Republicans, I think it is typical of politicians in general.  He made it clear that he felt politics was a career.  He painfully states, atnasium, how much better he did for himself that his parents.

The book also covers the tumultuous campaign between him, Kendrick Meeks and Charlie Crist.  The book gives you an insight which I have not seen in other books.  He shares certain aspects of the campaign and how the tacticians thought and acted.

The criticism notwithstanding, I like Marco Rubio and I think he has potential.  He needs to embrace the Constitution more and relax on the Jingoism.  I follow his actions in the Senate and there is some wasted time on his part voted for frivolous things that do not benefit or protect the State of Florida which should be his job.