The Litigators By: John Grisham

A bit anti-climactic.  The book is well written however the story takes you down this long drawn out mass tort case about a drug names Kraoxx that is suposed to be causing death and heart attacks.

David Zinc is a well paid attorney for a big "hordy-tordy" law firm in Chicago.  He is making $300,000.00 a year but works way too many hours.  He finally snaps and suffers a meltdown causing him to quit the firm unexpectedly.  In his new found freedom of the morning he quit, he stumbles into a bar and gets sauced all day avoiding calls from him co-workers and his wife.  He finally leaves the bar and ends up in a law office far from the heavy hitting downtown firm he left.  He finds his way to Law Offices of Finley and Figg; a motley crew of ambulance chasers and divorce attorneys.  Wally Figg ends up finding a mass tort case that is about to take them to the big times and away from the divorce and personal injury cases. 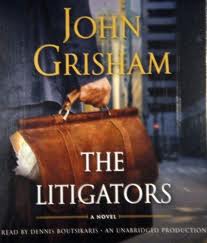 The problem with this book is that it takes you into the world of mass tort law suits explaining in details the trial proceedings.  Then proceed to wrap everyting up in two chapters (out of ~49).  ****SPOILER ALERT**** I have to say though, I found myself on the tip of my seat when David did the cross-examination on the clinical testing practices of Varrick, however I was let down quickly by the loss of the case.  Then the actual case they [David] win, without a trial mind you, is quickly glossed over.  I think the title of the book should have been placed in "" since they obviously did not show any skill in litigating save that of David cross-examination.

I will give Mr. Grisham another chance.  This is the first Grisham book I read.

Posted by Manny Fernandez at 11:40 AM