Wrong on Race: The Democratic Party's Buried Past By: Bruce Bartlett

Where do I start on this book?  The premise of the book is one that attracted me early on.  I had it on my "to read" list for quite a while.  Finally I read it.  I agree with the author on the latter years of the Democratic Party, however as most of my review state, I do NOT agree with this author that Lincoln went to war with the South to free the slaves. 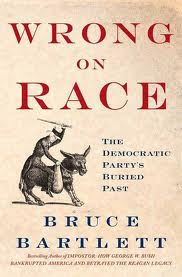 The author says:
"Those who murdered, tortured, abused, and enslaved millions of black people should be given a pass, they implicitly said. Let's just pretend that nothing happened; in effect saying that hundreds of thousands of people on both sides died for nothing"

Funny thing though, the author leaves out how Sherman and his march to the sea murdered innocent civilians that did not own slaves and were not part of the rebel force all under the orders of "The Great Emancipator".

The author paints ALL the North as non-racist, anti-slavery and all around great people.  However his opinion on the South is a bunch of racist, slave owning, ignorant fools that deserve the death and destruction they suffered by the hand of the North.  The North, being the ones that wanted to "save the Union".  I guess by exterminating thousands of women and children that had nothing to do with the South's or North's issues.


"People won't risk their lives in war to fight against a tariff; no war in history can be traced to that origin." Here the author tries to tell you that the war was indeed fought from the south to keep slaves even by those that did not have slaves fought (only 4% of the South were slave owners).  He obviously chooses not to remember the Stamp Act of 1765 which can be argued was the genesis of the Revolutionary War.

The book does show the twisted affinity of blacks in this country to the Democratic Political Party which has done so much to keep them to this day enslaved and used for political posturing.  I do NOT agree that you party affiliation makes you or precludes you from racism.  Racism is something that would not exist if we all ascribed to the notion that ALL MEN ARE CREATED EQUAL.  I believe by allowing the government and others to label you or associate you to a group, whether it be race, creed, sexual orientation or whatever, we are segregating ourselves and giving fuel and opportunity to those who use "race" as a political weapon.

This book is chock full of examples of how disingenuous the Democratic Party is about its past.  I truly believe that one of the reasons the Dems accuse the Republicans of being racists is to draw the attention away from their dark past with regards to race.

The book is very informative and I think you should read it if only to inform yourselves of the racism the blacks have endured.  It is truly sad to see the Human Family act in this fashion.  Although slavery is an abhorrent institution, I have to say that level of treatment and abuse suffered by blacks in this country after slavery and up until the late 20th century is far more abusive and vindictive than what we saw with the founding father's era of slave ownership.  I do not give them a pass.