If you are looking for a book to mirror the HBO series, continue to look. I must admit, it was what I was looking for.  I wanted more insight on Enoch "Nucky" Johnson AKA Nucky Thompson.  Although it was not that, I was pleasantly surprised. 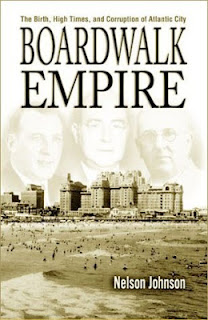 Very interesting book about the rise, fall and rise again of Atlantic City, New Jersey or formally known as the Island of Absegami.  Although it does spend a considerable time on Enoch "Nucky" Johnson and his predecessor, Louis “Commodore” Kuehnle, it delved into the lives of their lieutenants and their henchmen who subsequently rose to and fell from power.  It sheds light on the cronyism and corruption of the olden days.

Not surprisingly, the book makes the Republican Party out to be the racists by using statement like this "The switch in loyalties came in part as Blacks recognized the racist tactics of the Republican machine." - Chapter 8.  The previous quote being in the 60's.  So what the author is saying is that the racial tension, lynching, Jim Crowe, Black codes etc created and perpetrated by the Democratic Party theretofore were benign; yet the Republicans caused the black loyalty to falter because they marked ballot cards? Ironically, Nucky earned the black vote in his tenure because of the pre-new deal help he gave black families.

The book is more about the political cronyism than that of the traditional "mob" stories. It does move back and forth in time although it is understandable due to the nature of the book.  Some of the "no-names" during Nucky's rein, went on to be a force to be reckoned with and the author needed to re-trace their steps.

All-in-all the book is good.  If you can put aside the partisan bashing you should be OK.  To the author's defence, AC was definitely run by Republicans.  The book's author is Nelson Johnson (No relation to Enoch Johnson), a former New Jersey Judge.

Posted by Manny Fernandez at 10:12 PM