DemoCRIPS and ReBLOODlicans: No More Gangs in Government By: Jesse Ventura and Dick Russel

Ventura is a strange seed.  He has historically claimed his Libertarian beliefs yet this book has many inconsistencies when compared to the "Libertarian" platform.  Ventura implicitly supports the "rich" to pay 90% in taxes.  Although I do not believe that corporations or their executives should not pay $0.00, I disagree that someone, because they have succeeded on their own merits or have created exceptional products should be penalized by taking 90% of their earnings.  With that said, I am opposed to crony-capitalism and companies and "CEOs" getting rich by stealing from the public. 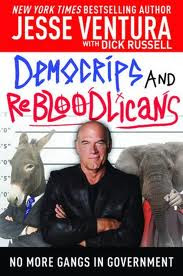 Additionally, Ventura eludes to the support of Universal Health Care, Climate Change, and other "DemoCRIPS" ideology.  He is extremely hard on the "ReBLOODlicans" yet somewhat gives the "DemoCRIPTS" a pass.  Here are just a few of his inconsistencies:

1. Koch Brothers sent out a letter/memo telling their employees who to vote for.  Ventura neglects to say that the almost 100% "democript" Unions do the same thing.  I do not necessaarily agree with the practice but he had the opportunity to do some equal opportunity bashing.

3. Tea party are BAD while OWS are GOOD.  He rants on and on about how the Koch brothers funded the Tea Party making it "AstroTurf" instead of a grass roots movement.  However he neglects to let you know that the OWS movement was also being funded by the democript's "shot caller" (To use his gangster analogy) George Soro's

I agree with a lot of what he said.  He seems to be a far left leaning Libertarian and supports massive regulation over free market, however he seems level-headed enough (save the conspiracy stuff) and has enough common-ground to be able to work with to get true change. In the spirit of full disclosure, I am a hard core, even "radical" Ron Paul supporter. The presence of the chapter on Paul was very appealing to me.

The book is good and points out both sides', albeit lopsided, ignorance and involvement in this spiralling downward society where soon, if unchecked, will become a dystopia.


Posted by Manny Fernandez at 7:06 AM