Jim DeMint is a great senator. Although I do not agree with him on every point he seems to have common sense and that, I can work with.  I do not believe the politicians need to agree 100% with each other, but what we have today is obviously not working.  We have indebted ourselves with the past two administrations and there appears to be no end in site, even with Romney being touted as the Savior.  The out of control spending and the misinformation and divisive ways of this administration is mind blowing. 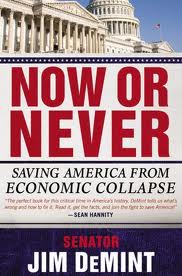 This book is marketed as a call to action.  I think it is wonderful what the Senator has done with the Senate Conservative Fund.  With his help, we have seen Senators elected to office against the established RINOs that have fidelity to the Constitution such as Sen. Mike Lee and Sen. Rand Paul.  Others not so much like Marco Rubio (See my review of "The American Son").

DeMint described the gridlock in Washington and the reasons for it.  The importance of a balanced budget and the stonewalling by Democrats in the Senate who refuse to even put it to a vote.  He sheds some light on the reasons why the Dems are stonewalling. DeMint also described the "problem" with bipartisanship and how nothing good comes from it except expansion of government.

I do not believe in parties.  I think they corrupt the system and leave you with a black/white solution for everything.  You are either 100% on or 100% off and they divide the country into class, race, sex, etc.  I am not a Republican, nor do I think they have all the answers, but I tend to see that they have more of a handle on the financial situation than the Dems.  This hoopla of taxing the 1% would only bring in 47 Billion in 10 Years.  We are borrowing $41K a second.  This would just be more money into the Federal Government to spend on frivolous shit.  This is a class warfare move since the Democratic run senate refuses to pass a budget, refuses to cut anything, even the Simpson Bowles recommendations from an Obama appointed commission has been ignored.  It seems the Dems are more concerned in divide and conquer than actually fixing the problem.  Why not say that there will be no more spending outside of the budget and all the money collected from the 1% would ONLY go to pay down the debt?

I do believe which DeMint barely touches that the reason the government can continue to do what it does is because of the "Federal" "Reserve".  Without their ability to fabricate money, it would be impossible for the US to maintain the constant state of war and the unsustainable social programs they have today.  If you don't track something, you can't improve on it.  There are hundreds of programs that are failing and rather than try to do away with them or consolidate with others and fix them; the politicians would rather not give the impression of "taking something from someone" and just create other useless failed programs.  This is where the duplicity comes into play.  Why have 200 failing programs and not one that is tracked and improved upon?

Something needs to be done, and quickly.  The current administration does not seem to have an idea what they are doing.  It is not working partially because its ironically more of the same (W).

A truly good book although most of the Information contained therein, I had already learned from other books, It was an interesting read with introductions of each chapter by one of the Senators SCF supported.