I watched the 'Pirates of Silicon Valley' about 300 times.  I used to do this religiously on Sundays so that I could start work on Monday charged up and ready to "change the world".  Most of the beginning of the book is a rehash of that movie and I learned nothing new.

The book covers his professional career and life but falls short of a "traditional" biography.  Very little is covered about his pre-Apple years.  Even so, the book keeps you engaged as only Mr. Job's career could. 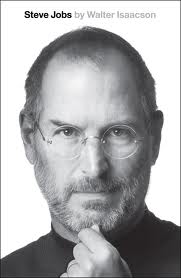 My take on Mr. Jobs is that he truly was a "A-Hole".  He was mean, heartless and cold as ice.  He was not a genius in the sense that technically he relied on other people's talent however he was a genius in design and in pushing people to do what they perceived as impossible.  I never met him personally, but I know people like him that say things in such a way that even if you know it to be wrong, you second guess yourself.  I assume Steve was this type of person.


The book is filled with irony. For example, Steve rails on about how MP3 downloads was considered theft and bad karma however he had no qualms about loading HIS personal iPod with the bootleg copies of Bob Dylan's music.  Along the same lines about stealing, ironically he stole the 'Graphical User Interface' from Xerox while accusing Microsoft of stealing it from them (Apple).

Steve Jobs was a remarkable person.  His vision of products truly revolutionized the world and the way we live it.  Although very few, if any Apple product were actually original Apple products, Jobs had a way of putting his flare into the product and making it better and a success.  For instances, the 'Smart Phone' had been around for a while, as was a tablet PC, and an MP3 player,  Steve just made them better.

Seeing him contemplate death was very difficult.  For a person that was a control freak and ALWAYS got his way, it must have been the most debilitating experience for him.  Additionally, his relationship with his middle daughter or rather lack thereof was equally difficult.  I could imagine Steve giving President Obama a rash of $H!7 for being unfriendly to businesses.  Steve was on the money when he said that the politics makes things not work.  I agree with him.  The politics of the day, only serve to divide and conquer and no one wins when they pit one group against another. He was also on the money when he told Obama that teachers should be treated as professionals and not factory workers being unionized.

I was a bit let down because I wanted to know the last days of Mr. Jobs, how he passed on and what was the funeral like.  What was his state of mind; was he at peace?  Did he have closure with Lisa?   Was it minimalist?  Who attended; who eulogized him; and how and where he was buried?  I hope some one writes a book about Steve Jobs that covers more of the beginning and the end as I feel Mr. Isaacson fell short.


As a side note, the fact that I watched 'The Pirates of Silicon Valley' so many times, twisted my view a bit because I kept seeing Noah Wiley who played Jobs on the movie as I was reading the book.  He did, by the way, do a great Steve Jobs.